Profits: Wipro has reported a 9.5% on-quarter fall in net profit to Rs 2.930 crore in Jul-Sep 21 period as margins took a hit. Analysts had earlier estimated a net profit of around Rs 2,869 crore. On a year on year basis profits saw a rise of 17%.

Revenue growth across verticals: The growth in the business was led by the financial services, which grew over 44.3% on-year. Besides BFSI, Consumer Business Technology also clocked over 25% on-year growth in the Jul-Sep 21 period. In terms of geography , nearly 58% of revenue was contributed by the US. 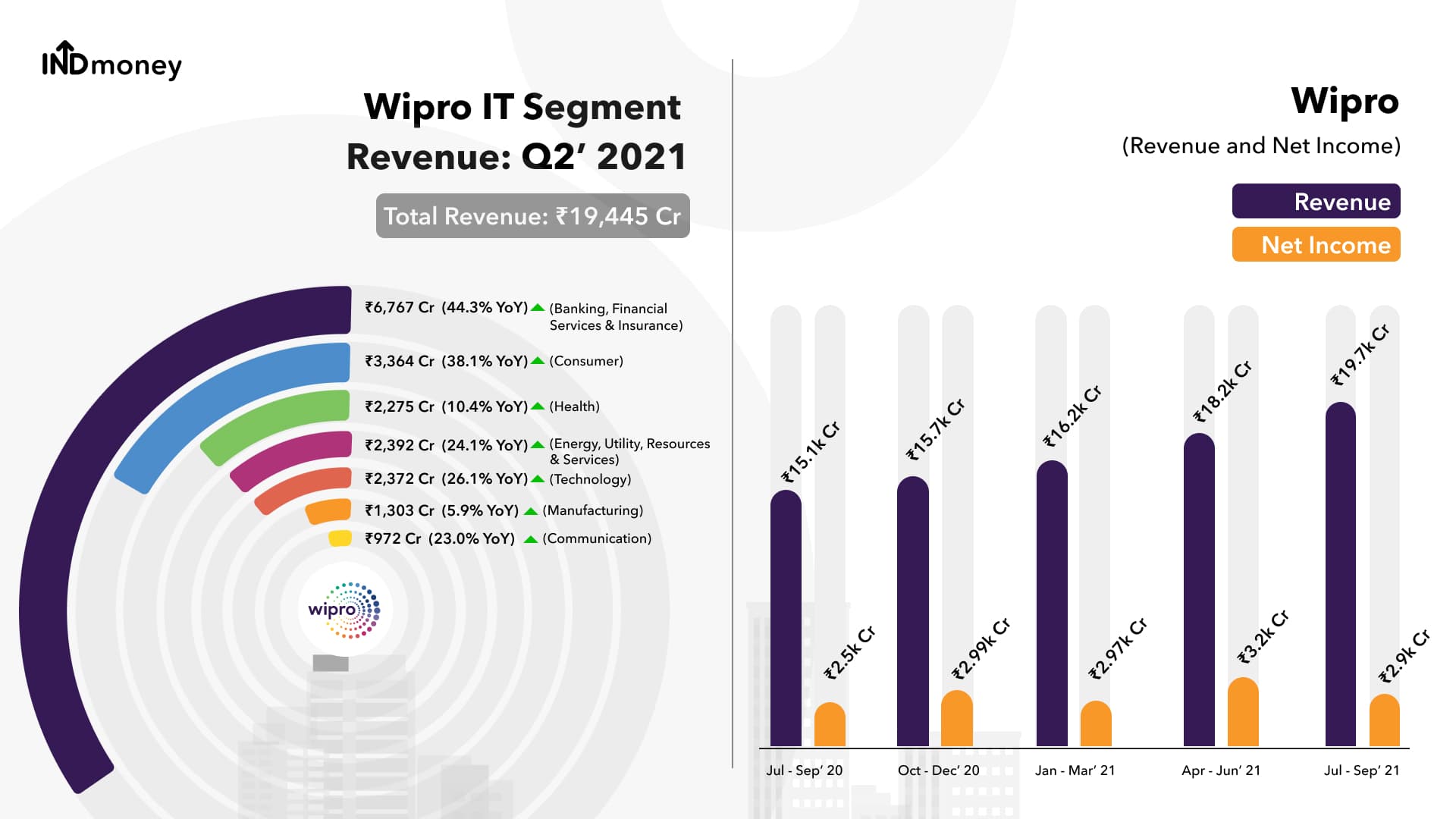 Margins: Wipro’s Operating Margin contracted by 104 bps on a reported basis to 17.8% due to wage hikes and amortisation charge on Capco acquisition. Earnings Per Share for the quarter was at ₹5.36, an increase of 23.8% YoY.

Deal Wins and acquisition: The company added deal wins worth $3 billion during the quarter. Also, it completed the acquisition of London-headquartered The Capital Markets Company Capco, a consultancy firm in the banking and financial services space, on April 29, for $1.45 billion. It was the largest ever buyout by the company so far.

Robust guidance: Wipro expects revenue from the IT services business to be in the range of $2,631 million to $2,683 million for the third quarter. This translates to a sequential growth of 2- 4%.

Attrition Rate: The attrition rate (trailing twelve months) stood at 20.5% for Sept 21 quarter, increasing significantly from 15.5% in the last quarter, and from 11% in Q2FY21.

Wipro has delivered a second consecutive quarter of strong performance on order booking, revenue and cash flows. The company grew at over 4.5% organic sequential growth for a second quarter in a row, resulting in a 28% YoY growth in the first half of this financial year and also surpassed the $10 billion milestone of annualized revenue run rate. The company sustained its operating margins in Q2 in a narrow band even after absorbing the full impact of its recent acquisition of Capco and a second salary hike in this calendar year.

Wipro has reported better-than-anticipated numbers in the current period, aided by large deal wins and strong growth in revenue across verticals. While the ongoing pandemic has affected various businesses, it has forced a tectonic shift in business processes to move towards greater digitization providing a good opportunity for the IT industry.  Going forward, Wipro is confident of delivering long-term sustainable growth. Shares of Wipro ended at Rs 709, up 5.4% on the NSE.