Net Profit/(Loss): Vodafone Idea, reported ninth successive quarterly loss, narrowing it to ₹ 7218 crore for the quarter ending September 2020. A year ago, the telecom had posted ~ ₹ 51,000 crore loss for the same reporting period on account of making provisions for AGR dues.

Impairment: The quarter-on-quarter impairment charge declined to ₹ 767 crore, from ₹ 19,923 crore, the latter being mainly attributable to provisions for AGR dues.

Current Maturity Debt: Vodafone Idea had for the year ending March 2020, classified ₹ 14,280 crore worth of debt as current maturity debt, i.e. payable within one year on account of not meeting certain covenant clauses. ₹ 4,500 crore of this current maturity debt has received waivers through correspondence with the lenders.

Subscriber Base and ARPU: Fall in subscriber base remains a continuing problem for Vodafone Idea. Its base declined to 27.18 crore users in Q2FY21 from 27.98 crore in Q1FY21.

Average revenue per user (ARPU) is a measure used by telecom companies, defined as the total revenue divided by the number of subscribers, is the amount of money that a company can expect to generate from an individual customer on an average. For quarter ending September 2020, Vodafone Idea saw its ARPU increase to ₹ 119 from ₹ 114 in the previous quarter, majorly attributable to more subscribers moving up the tariff plans as data consumption increases. 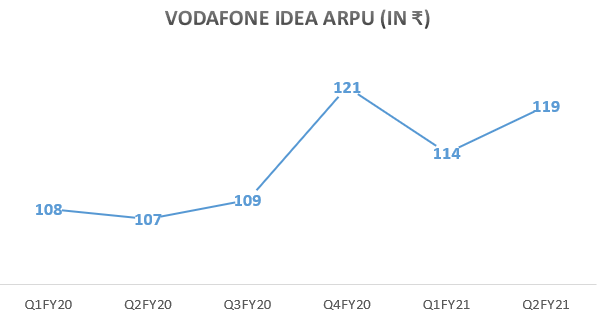 Fund Raising: Vodafone Idea’s board has approved raising ₹ 25,000 crore through a debt equity mix, to upgrade its network so as to tackle Reliance Jio and Airtel, and also to meet its statutory Adjusted Gross Revenue(AGR) dues, which are to be paid over 10 annual instalments through March 2021. Currently Vodafone India owes ₹ 50,000 crore out of the estimated ₹ 58,000 liability.

Indus Tower-Bharti Infratel Merger: On 22nd October, 2020, National Company Law tribunal(NCLT), approved the merger between Indus towers and Bharti Infratel. Vodafone Idea is all set to monetize its 11.5% stake in Indus on completion of the merger, Rs. 38 billion (~US$ 520 million).

Tax Relief: The Permanent Court of Arbitration in The Hague held that retrospective tax in the amount of ₹ 20,000 crore by Indian Tax Authorities on Vodafone Group Plc was void and any attempt to enforce the tax demand would be a violation of the country's international law obligations. The court ruled that the tax demand is in breach of the bilateral investment treaty (BIT) between India and The Netherlands. Any further challenges to the order, by IT Department, will go through Singapore High court on jurisdiction basis.

Vodafone Idea traded 6% up in the early hours on Friday on back of narrowing losses, and closed the week at ₹8.75, up 5%. The  company's cost optimization process is underway with a target to achieve ₹ 4,000 crore annualized opex savings over next 18 months. As of the quarter ending September 2020, the company has reportedly achieved  ~ 25% cost savings of the target.