US markets started off the week on a strong note on Monday,  as investors were upbeat ahead of earnings from tech giants. However, investors remained slightly cautious ahead of the two-day Fed meet.

The index reversed its course with the index falling for the first time in 6 days on Tuesday, as a rout in Chinese stocks and mixed earnings from mega-cap tech companies weighed on sentiments.

On Wednesday, the markets declined slightly as investors continued to be apprehensive about increasing regulations on Chinese technology stocks. However, the Fed’s move to keep rates unchanged provided some relief, as there were concerns that the central bank may begin to raise its interest rates due to fears of increase in inflation.

The index hit a fresh record high on Thursday, after the Fed reassured that it is nowhere near considering a rate hike despite optimism of economic recovery.  US stock indexes closed lower Friday, as rising concerns around the spread of delta variant and below par results from Amazon weighed. The S&P 500 posted a weekly loss of 0.4%, while tech heavy Nasdaq ended the week 1.1% lower. 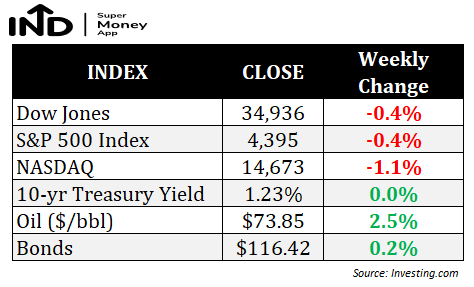 Earrings season gains momentum: This was the busiest week in terms of earnings, with nearly 177 out of 500 companies reporting their Apr-Jun quarter numbers. Mega caps including Amazon, Apple, Google, Microsoft and Facebook, which together make up 22.5% of the index, reported very strong earnings growth. A decline in Amazon.com shares weighed on the consumer discretionary sector after the company missed consensus second-quarter revenue expectations.

Fed keeps rates unchanged: The US Federal Reserve kept its benchmark interest rate unchanged between the 0.00% - 0.25% in its latest review. The Fed also noted that the US economy 'has made progress' toward its goals of maximum employment and price stability since December, and the central bank will continue to assess progress in its upcoming meets.

Investors concerned over delta variant: Investors’ remained highly concerned over the spread of the delta variant. The Centers for Disease Control and Prevention has recommended  that vaccinated individuals wear masks indoors again in higher-transmission areas. The CDC has said that as of July 26, 6,587 people have got infected by the variant despite being fully vaccinated.

Oil prices gain: Crude oil prices gained in the week on the back of increasing demand. The oil prices were supported by a rapid increase in vaccination but the surge in the Delta variant capped the upside. West Texas Intermediate (WTI) crude gained 2.5% in the week to to $73.85 per barrel.

Tech Mahindra Results: IT firm Tech Mahindra reported a 25% rise in its net profit for the quarter ended June at Rs 1,353.2 crore as against Rs 1,081.4 crore in the last quarter, beating analyst estimates. Analysts had earlier estimated a profit of about ₹1216 crore. On a yearly basis, net profit rose 39% from 972 crore in the same quarter last year. The bottomline was aided by major deal wins. Read more