US markets started off the week on a good note on Monday, closing at a new high after the USFDA (United States Food and Drug Administration) granted approval for Pfizer and BioNTech vaccine. However, the developing geopolitical situation in Afghanistan capped gains.

Investors awaited the G-7 leaders meet later in the week to meet to discuss whether to recognise the Taliban’s leadership. The index continued its record rally on Tuesday, after the US House passed a measure approving a $3.5 trillion budget blueprint.

The S&P 500 extended gains for the third straight day on Wednesday, ahead of the much awaited Jackson Hole Symposium. Investors keenly awaited the virtual meet of US central bankers to get cues around the monetary policy, especially after last week’s remarks that the Fed has started discussions to pull back its $120 billion a month bond buying program by the end of Dec-21.

The index pulled back from highs on Thursday, as investors remained concerned following the bomb blast in Hamid Karzai International Airport in Afghanistan. Investors also awaited more details on Fed’s policy ahead of Jerome Powell’s address on Friday.

US stocks ended higher on the last day of the week, following Jerome Powell’s dovish remarks at the Jackson Hole central bankers’ symposium. For the week, S&P 500 ended 1.5% higher while the Dow Jones closed 1% higher. 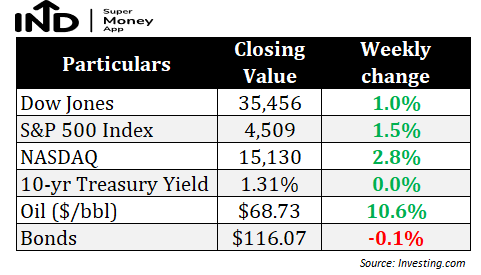 USFDA grants full approval to Pfizer for vaccine: The USFDA has granted full approval to Pfizer as well as BioNTech this week. According to analysts, this may lead to several large US companies now requiring their employees to be fully vaccinated, while the federal government will now mandate vaccines for those enlisted in the US military.

Fed’s stance at Jackson Hole Symposium: Investors keenly awaited Friday’s speech by Fed Chair Jerome Powell at the Kansas City Fed’s Jackson Hole conference (held virtually). Powell said that he supported scaling back the Fed’s bond purchases this year. However, he did not signal specific timing, and reiterated that inflation would be a short-lived phenomenon. In his assessment, the recent increase in inflation is largely caused by supply chain bottlenecks and increased demand as the economy recovers from the pandemic. Analysts are viewing the speech favourably, as the Fed did not state anything on when it would start putting an end to the pandemic-driven easy monetary policy.

Indian market weekly wrap: The Nifty started off the week with decent gains on Monday. IT stocks climbed while Auto and Metal tumbled. The index continued its rise on Tuesday, tracking positive cues in other Asian markets. Domestic sentiments were upbeat after Finance Minister Nirmala Sitharaman launched the National Monetisation Pipeline (NMP) on Monday. Through NMP, the government will be selling infrastructure assets worth Rs 6 lakh crore over the next four years. Read more

Nykaa Pre-IPO details: Nykaa plans for an IPO that will consist of a fresh issue of Rs 525 crores and an offer for sale of around 4.3 crore equity shares taking the total issue size to Rs 4,000 crore at a $5 billion-$5.5 billion. Nykaa is a leading multi-brand Beauty and Personal Care (BPC) platform in India founded by Falguni Nayar in 2012. Read analysis