The week's trading started off on a strong note with the index closing at a new peak on Monday and Tuesday, as investors were upbeat with the start of earnings season, and news around the vaccine. In the week, 22 of the S&P 500 companies were scheduled to report first-quarter results, according to data from Reuters.

Vaccine news also appeared to drive sentiment. S&P 500 took a breather on Wednesday after U.S. regulators announced a 'pause' in Johnson & Johnson's coronavirus vaccinations following rare reports of blood clots. The index resumed its rally in the last two days of the week, as upbeat earnings from banking giants Bank of America and Blackrock, as well as a strong rebound in March retail sales boosted sentiments. The S&P 500 settled 1.4% higher in the week. 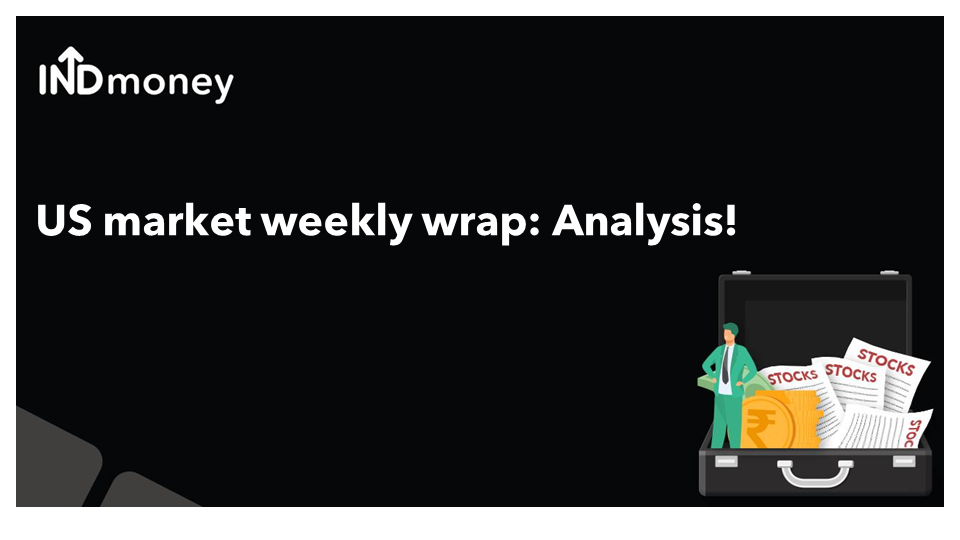 Let's see the major developments during the week

Upbeat earnings by index heavyweights: Overall sentiment seemed to get a boost from release of earnings results from banking giants JPMorgan Chase, Goldman Sachs, and Wells Fargo. Analysts polled by Refinitiv currently expect overall earnings for the S&P 500 to have grown by roughly 25% in the quarter on a year-over-year basis. This the the highest since the sharp cut in corporate tax rates that took effect in 2018. The table below shows a comparison of earnings of various companies with their estimates.

Vaccine news drives sentiment: U.S. regulators announced a "pause" in Johnson & Johnson's coronavirus vaccinations following some reports of blood clots, leading to a correction in the index. On Thursday, however, investors seemed encouraged by Pfizer's announcement that it could deliver 10% more of its vaccine by the end of May than promised earlier.

Robust macro data: March retail sales grew by 9.8% on-year, the highest since May-20. The growth reflects recovery due to the continued reopening of restaurants. The retail sales had declined by 2.7% in February, due to severe cold weather. Investors also welcomed news about robust manufacturing data, with a barometer of mid-Atlantic factory activity hitting record high levels in 50 years. Weekly jobless claims came in at 576,000, well below consensus expectations.

Oil prices remain volatile: Crude oil prices surged mid-week, after the Energy Information Administration reported that crude oil inventories had dropped by 5.9 million barrels in the week ending April 9. This compared with an inventory draw of 3.5 million barrels for the previous week. However, oil prices gave up gains towards the end of the week due to worries over rising COVID cases in emerging markets including India and Brazil. 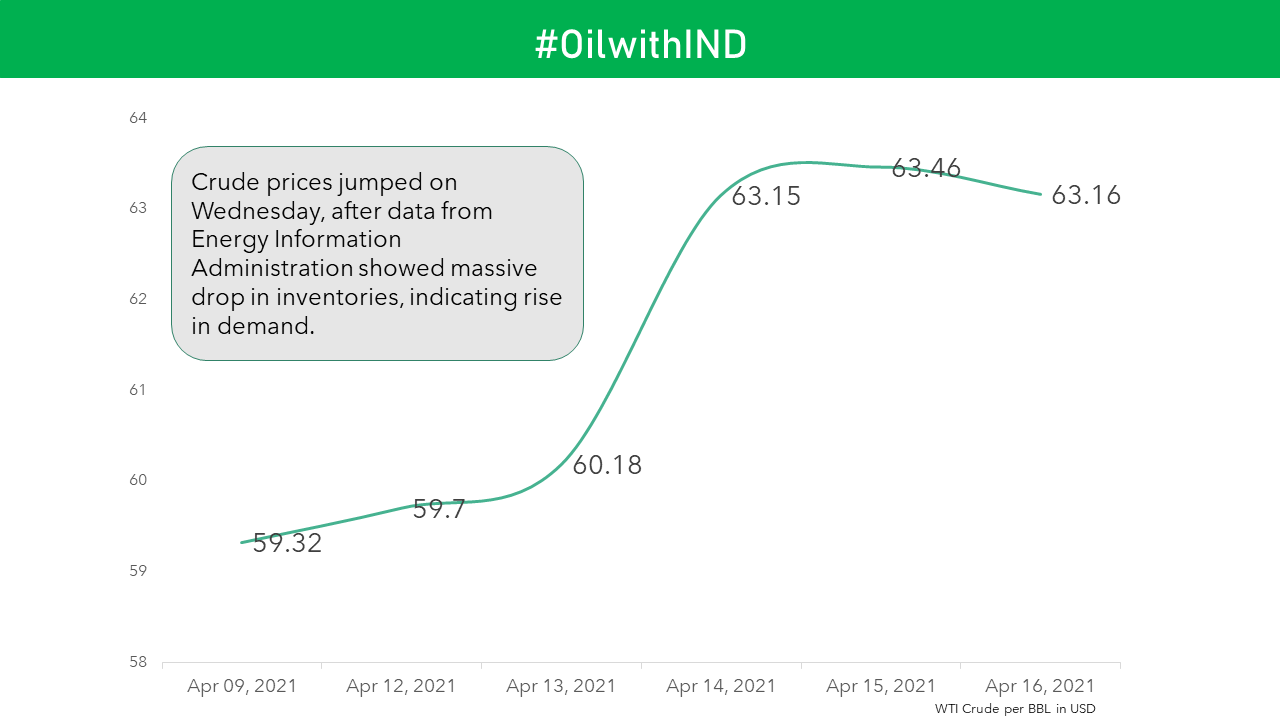 US Treasury yields ease: US Treasury Yields eased during the week after data showed US inflation was not rising wildly as the economy reopens. Headline consumer prices rose 0.6% in March, while core (less food and energy) prices rose 0.3%, largely in-line consensus expectations. Over the previous weekend, Fed Chairman Jerome Powell reiterated policy support stating that the Fed would like to see inflation on track to move moderately above 2% for some time. 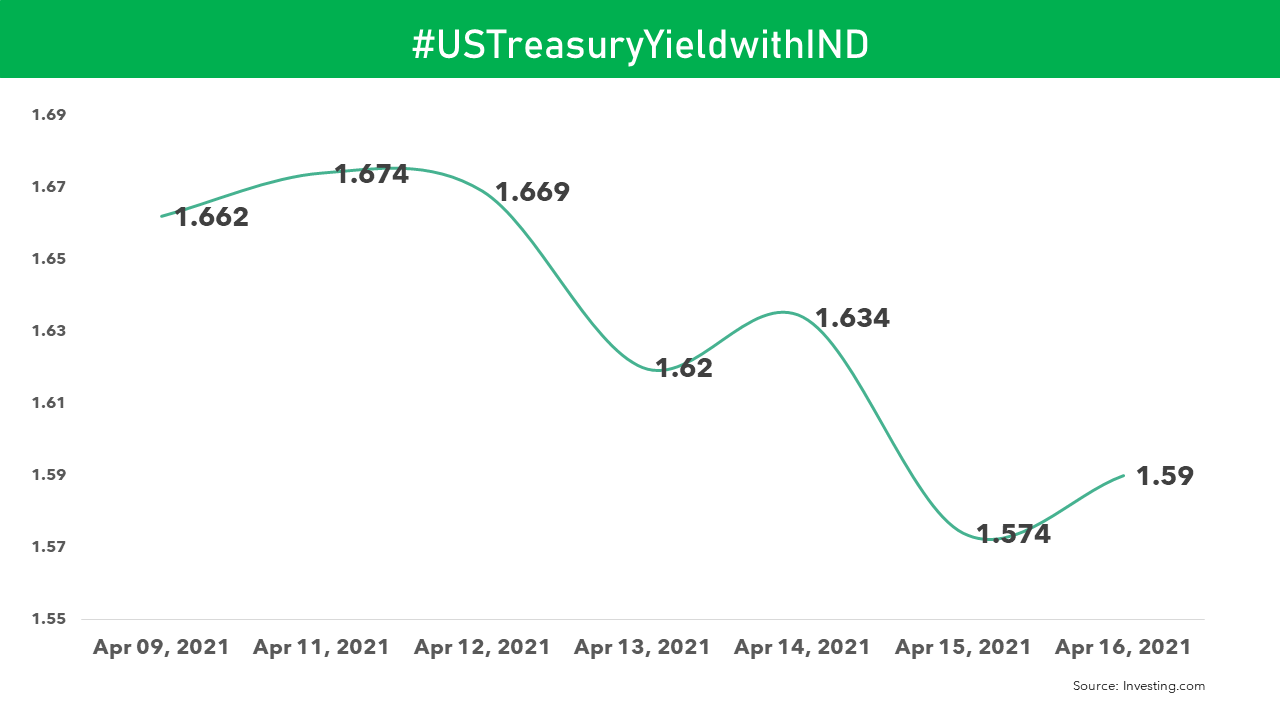 Market wrap- Rising cases, weak macro data lead to yet another weekly fall: The markets saw another interesting week, with factors such as additional curbs due to rising Covid-19 cases, Q4 earnings releases, and macro data steering the course of the index. The Nifty plunged by more than 3.5% on Monday, as surging Covid-19 cases led to fears of fresh lockdowns. View analysis