The US equity market indices fell sharply over the week with S&P entering into a correction and Nasdaq now technically into a bear market. Inflation reached a 40 year high, further increasing concerns over Fed’s aggressive moves. Crude oil prices soared to $130 after the US banned Russian oil imports but fell back around $110 at the end of the week.

The US stock market fell sharply on Monday,  as the crude oil prices increased and the tension between Russia and Ukraine raised concerns of an economic slowdown. The NASDAQ entered a bear market (20% fall from peak), and Dow entered correction territory. All the major US indexes ended in red and the only positive on Monday were the energy stocks.

Biden imposed a ban on imports of Russian energy that included natural gas and oil on Tuesday. The US market continued the downward trajectory as the tension increased between Russia and Ukraine. Investors continued to show interest in the commodity sector amid rising prices. WTI Crude rose 3.6% to $123.70 a barrel.

The US stock market rose on Wednesday after recouping losses from the first two days. Punitive measures taken by the UK and US on Russia weighted on the equity market. Oil fell and came down to $110 a barrel, registering their biggest daily loss since April-20. Major US companies announced fresh plans to stop doing business in Russia for the foreseeable future.

The US indices ended lower on Thursday after the Inflation hit a fresh 40 years high. Now it is certain that the Fed will hike interest rates by the end of its monetary policy meeting next week. Investors’ sentiment also got dented after yet another round of diplomatic talks between Ukraine and Russia reached a stalemate.

The US market closed on a negative note on Friday as investors weighed upbeat remarks from Russian President Vladimir Putin about diplomatic discussions with Ukraine. For the week, the S&P 500 was down 2.9%, Dow 2% and Nasdaq 3.5% now technically into a bear market.

Indices continued to fall - S&P 500 has entered into a correction after falling more than 10% from its 52 week high. Consumer staples stocks further dragged the index as Coca-Cola, PepsiCo, and other food and consumer products were suspending business in Russia. The Dow posted a fifth straight weekly loss - its longest losing streak since 2019.  The NASDAQ has fallen significantly, and this week it entered into the bear market. NASDAQ made a high in November, and on Tuesday, it went down by 20.1% from its November high. Check our detailed report on the same.

US Treasury Yields - U.S. Treasury yields increased amid continued inflation concerns and some renewed hopes on Russia-Ukraine negotiations. Treasury yields reached its highest level since March 2020, but it began to widen as the week progressed. The yield on the 2-year note gained 3 basis points (bp) to 1.74%, while the yield on the 10-year note was up 30 bps at 2.00%, and the 30-year bond rate was 2 bps lower at 2.36%.

US inflation data - The Consumer Price Index (CPI) rose by 7.9% YoY in February, the most since Jan 1982 and higher than January's CPI of 7.5%. It is the fifth straight month of annual CPI readings above 6%. This was largely driven by higher energy and food prices and higher core inflation, as shelter and rent prices continued to rise. The inflation is much higher than the Federal Reserve's target of 2%. The CPI inflation can go to 8%-10% if Crude oil prices continue to rise. The chart below shows that rise in crude oil price has driven inflation higher. 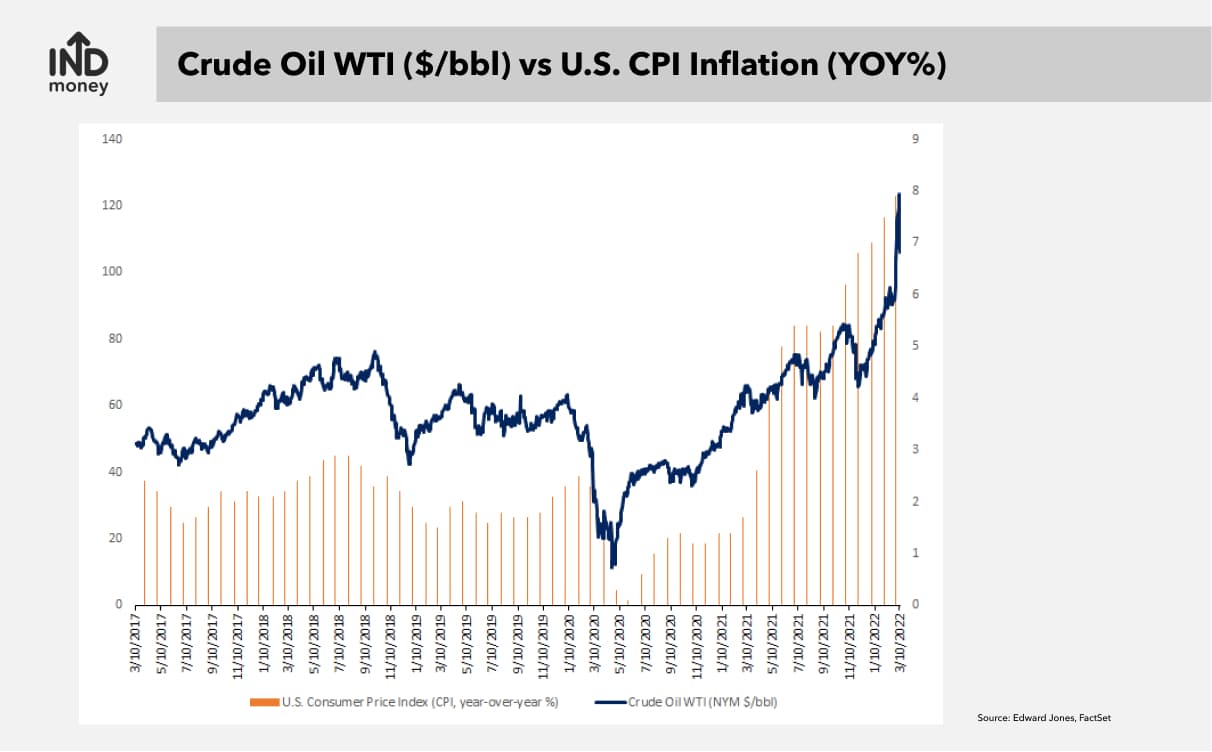 Quarterly results - Many major firms including Oracle, Lego and Rivian reported their quarterly results. Oracle Corporation reported Q3 EPS of $1.13, below street estimate. Stitch Fix and DocuSign shares plummet after the company cuts guidance for the year. Lego revenue jumped 27% in 2021, as kids and adults continue to favour the brand. Tesla competitor Rivian sank 8% after it missed Q4 estimates on both the top and bottom lines.

Crude Oil Prices -  Crude oil prices witnessed a volatile week amid sanctions and ongoing crisis. The Brent crude oil prices reached $130 per barrel, a 14-year high on Monday. Prices further soared after President Joe Biden on Tuesday announced that the U.S. was cutting off all imports of Russian oil and gas. Oil prices fell back midweek after UAE officials said they are willing to increase production, however the country’s energy minister later clarified on sticking with existing OPEC production plans.