US markets dipped on Monday, as concerns around fuel demand due to resurgence of the delta variant weighed on sentiments, leading to fall in Energy stocks. The index resumed its rally on Tuesday hitting new highs, after the Senate passed a $1 trillion bipartisan infrastructure package.

On Wednesday, the markets continued their rally as data indicated that US inflation growth may have peaked. Sectors tied to the reopening of the economy gained the most after passing of the mega stimulus.

The index recorded its third straight closing high in the week on Thursday led by a huge rally in mega-cap technology stocks. Investors sentiment was upbeat after jobs data indicated steady recovery.  The Labor Department said that jobless claims reduced to 3.75 lakh from 3.87 lakh last week. The Dow Jones Industrial Average and the S&P 500 finished the week with their longest stretch of closing records since March 15. Walt Disney’s strong earnings also boosted sentiments. For the week, Dow Jones ended 0.9% higher. 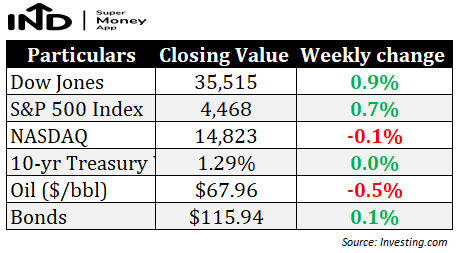 Let’s see the major developments during the week

US senate passes infra bill: The US Senate passed a $1 trillion infrastructure package, including about USD 550 billion in new spending. This is one of the top priorities of President Joe Biden. This new bill is proposed to rebuild traditional transportation infrastructure, improve access to broadband internet in rural areas, and upgrade the electric grid and water systems. Further, the Democrats have also approved a USD 3.5 trillion budget resolution, aimed at improving access to education and increasing support for families with children. The details of this bill are still awaited.

Consumer Price Inflation growth slows: The Consumer Price Inflation increased by 0.5% in July-21, after climbing 0.9% in June. This was the slowest month-on-month rise in the last 15 months. Core consumer price inflation, which excludes volatile food and energy costs, came in at 0.3%. This slowdown in the inflation rate was seen to be in-line with Fed’s recent comments that increases in consumer prices should prove transitory as the economy battles pandemic-related bottlenecks.

Oil prices plunge: Oil prices ended 0.6% lower in the week, after the International Energy Agency (IEA) said the spread of the Delta variant would slow the recovery of global oil demand.'Growth for the second half of 2021 has been downgraded more sharply, as new COVID-19 restrictions imposed in several major oil consuming countries, particularly in Asia, look set to reduce mobility and oil use,' IEA said in its monthly report.

Nifty notches up another high in the week: The Nifty started off the week with decent gains on Monday, buoyed by strong global cues. Global investors cheered a stronger-than-expected jobs report and robust macro data in the US, which overpowered concerns around spread of Delta variant. Read analysis

Shriram Transport Finance: Shriram Transport has reported a 77% on-quarter drop in Net Profit mainly due to higher provisions. Loan losses and provisions doubled in the quarter to Rs 1,434 crore, from Rs 723 crore, denting the company’s bottomline.  Read our analysis