US market: Indices ended in red amid negative macroeconomic signals

US indices closed higher on Monday, the first trading day of 2022, extending the bull-run that has started since mid-2020. Market participants shrugged off Omicron fears and possibility of the Fed to hike interest rate earlier-than-expected. All three major stock indexes ended in green.

US stocks closed mixed on Tuesday based on mixed economic conditions. The Dow rose sharply as market participants’ shrugged off Omicron fears. On the other hand, the Nasdaq Composite tumbled on soaring government bond yields. The S&P 500 fell marginally.

Fed’s hawkish Stance: Investors sentiment took a notable turn for the worse on Wed following the release of minutes from the Fed’s mid-Dec policy meeting. The minutes revealed that the Fed had discussed faster and more aggressive rate hikes, with the first quarter-point hike in the official short-term rate coming as soon as March. Officials also discussed taking steps to reduce the Fed’s balance sheet soon after liftoff. Selling a portion of the Fed’s $8.8 trillion in Treasuries and agency mortgage-backed securities would put upward pressure on long-term rates as well.

Yields Rise, Tech Falls: In this past week's sell-off, we have seen 10-year Treasury yields rise about 0.40 bps, to around 1.75%, and the Nasdaq has sold off 5.0% from its December 27 peak, getting closer to the historical 8% drawdowns. The 10-year Treasury yield went from 1.34% in early Dec to around 1.75% this week. This has put pressure on assets that are considered "long duration" and have loftier valuations, like Tech stocks, as well as on assets that are considered "bond like," such as utilities and real estate (which have high yields and more stable cash flows). 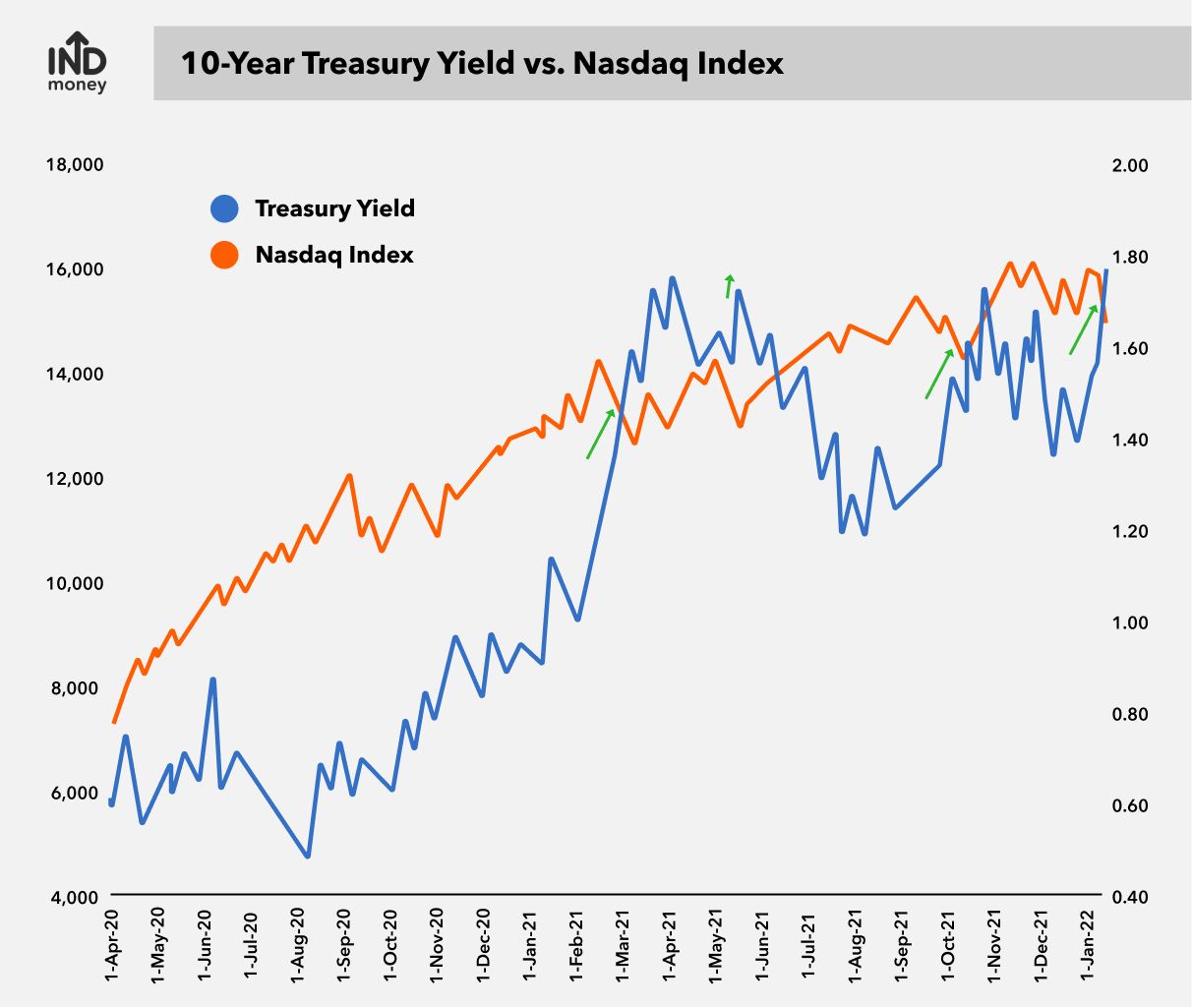 Jobs Report: Friday’s closely watched jobs data offered decidedly mixed signals. The monthly payrolls report showed that employers added only 1.99 lakh jobs in December, roughly half of estimated 4.5 lakh. The household survey, on the other hand, showed that the unemployment rate fell to 3.9%, lower than the 4.2% expected and near levels seen just before the pandemic. The conflicting data suggested that many Americans were choosing self-employment, especially considering the record 4.5 million people quitting their jobs in November.

Covid Update: The coronavirus has picked up pace in the US. With the Omicron variant spreading rapidly, the country is averaging more than 500,000 new cases a day, far more than at any previous point in the pandemic. Around 62% of the country is now fully vaccinated. The overall number of Covid cases stands around 59.4 million.