Paras Defence And Space Technologies Limited IPO opens for subscription on 21st September. The company is looking to raise Rs 170.78 crore through the public issue. Here are the details:

Objective of the issue

About Paras Defence and Space Technologies

The company caters to five major segments of the Indian defence sector. They are as below:

Defence Electronics - They provide a wide array of high-performance electronic and computing systems for defence applications that include subsystems for border defense, tanks, missiles, and naval applications.

Defence and Space Optics - High precision optics for space and defence applications such as space imaging and thermal imaging systems.

Heavy Engineering - They manufacture heavy engineering components for missiles and rockets along with mechanical manufacturing supports to other verticals.

Niche Technologies - Paras has identified and partnered with some of the leading technology companies around the globe to indigenize advanced technologies in the space and defence sectors to cater to the Indian market.

There are no listed peers of the company. However, it is being compared with Apollo Microsystems, whose IPO was launched in 2018. Some unlisted companies engaged in the production of certain products that Paras Defence also sells are Data Patterns, Mistral Solutions, CoreEL technologies. 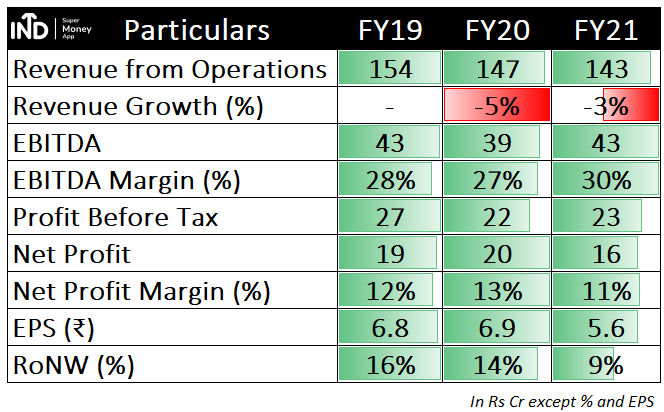 Wide range of solutions and products - The company has 34 different categories of products and solutions with multiple variations in each category. In the space sector, they have established heritage in the earth observation domain by supporting government organizations involved in space research across multiple missions. Their R&D and technological capabilities have helped them in diversifying their products and solutions.

High precision optics manufacturing - Paras Defence is one of the few players in high precision optics manufacturing for space and defence applications in India. It houses equipment and machinery, inter alia, for nanotechnology, grinding, machining, polishing, and turning coupled with robust testing set up for measuring the performance parameters of the optical components. They are well-positioned to cater to demand from Government space organizations for optics on earth observation and space exploration missions.

Strong R&D capability - The company has a strong emphasis on R&D, which has helped them to develop a wide range of solutions and products. The R&D department of the company has many achievements to its name. One of the biggest ones is that they have successfully developed and delivered remotely controlled surveillance and defence systems recently which will enhance their defence capabilities.

Make in India Initiatives - The company falls within the category of IDDM, the highest category in the priority of categorization under Defence Acquisition Procedure since most of their products and components are designed, developed, and manufactured in India.

Forward integration: The company plans on using part of the IPO proceeds to forward integrate camera manufacturing for the space sector. Currently, they manufacture just the lenses. This is expected to increase revenue.

New markets - The company currently manufactures lenses of cameras for the space sector only but has now got an order for automotive cameras too. They are also working on drone cameras. Expanding their know-how to other markets using cameras will be a great growth opportunity.

Targeting the international market - The company more than 80% of the revenue comes from the Indian market. The international customers of the company exist in markets like Israel and South Korea. The company plans to provide its product and solutions to markets in the United States and Europe. Recently, they have received orders from the United States and United Arab Emirates for manufacturing IR Lens and Electro-Mechanical Masts, respectively.

Dependency on the Government of India - The business and revenue of Paras Defence are largely dependent on the contracts from the government and associated entities. A decline or reprioritization of the Indian defence or space budget, termination of existing contracts, reduction in orders, delay of existing or anticipated contracts or programs, or any adverse change in the GoI’s defence or space-related policies will affect the business of the company.

Agreement with third parties - Paras Defence has executed various agreements with third parties in relation to securing contracts and manufacturing of products. The contracts may impose a certain obligation on the company, and termination of any contract may affect the business and lead to a decline in revenue.

R&D cost - Many of the contracts that the company has signed contain performance obligations that require innovative design capabilities, are technologically complex, or involve developmental costs. The company spends a substantial amount on R&D as part of our efforts to design, develop and commercialize new products and solutions and enhance existing products and solutions portfolios. However, there is no guarantee that R&D initiatives will be successful or be completed within the anticipated time frame or budget.

High working capital:  The company had working capital of more than 100% of the total revenue in FY21. The company’s MD said going forward they are forward integrating and will be manufacturing complete products in house, for example, not just lenses but the whole camera. This is expected to bring down their turnover times and improve working capital requirements.

Paras Defence’s topline has been in the range of Rs 143- Rs 154 crore over the last three years. On similar lines, the bottomline performance has also been lacklustre over the last 2-3 years, with profit in the range of Rs 16 crore to Rs 20 crore. Both topline and bottomline have declined over the last three years. However, the company’s order book has now crossed Rs 300 crore as at the end of June-21, with 40% of it from the Government of India.

Going forward, Paras Defence is looking to expand its production capacity, and gain further market share in India, as well as expand abroad. At the higher end of the price band, Paras Defence is aggressively priced at a P/E ratio of 43 times FY21 EPS (on a post-issue basis). While the company has indicated that there are no comparable competitors, larger defense majors such as Hindustan Aeronautics (15 times) and Bharat Dynamics (29 times) are trading at lower valuations.

However, Paras Defense is the sole Indian supplier of critical imaging components such as large size optics and diffractive gratings for space applications in India. It has developed strong R&D capabilities.

Given factors such as robust outlook, higher budgetary allocation in the future, stable operational performance, strong order book, steady margins and return ratios, we remain positive on the prospects of this issue.