Home
>
Articles
>
Oil prices back to highs after steep drop - What is causing the volatility?

Oil prices back to highs after steep drop - What is causing the volatility?

Oil prices bounced back on Thursday after a sharp drop in the previous session after the UAE backtracked on its earlier statements about increasing output. Earlier, the country had said that OPEC and its allies might increase output to help to plug the gap in exports from Russia. Let us look at the current situation in detail. 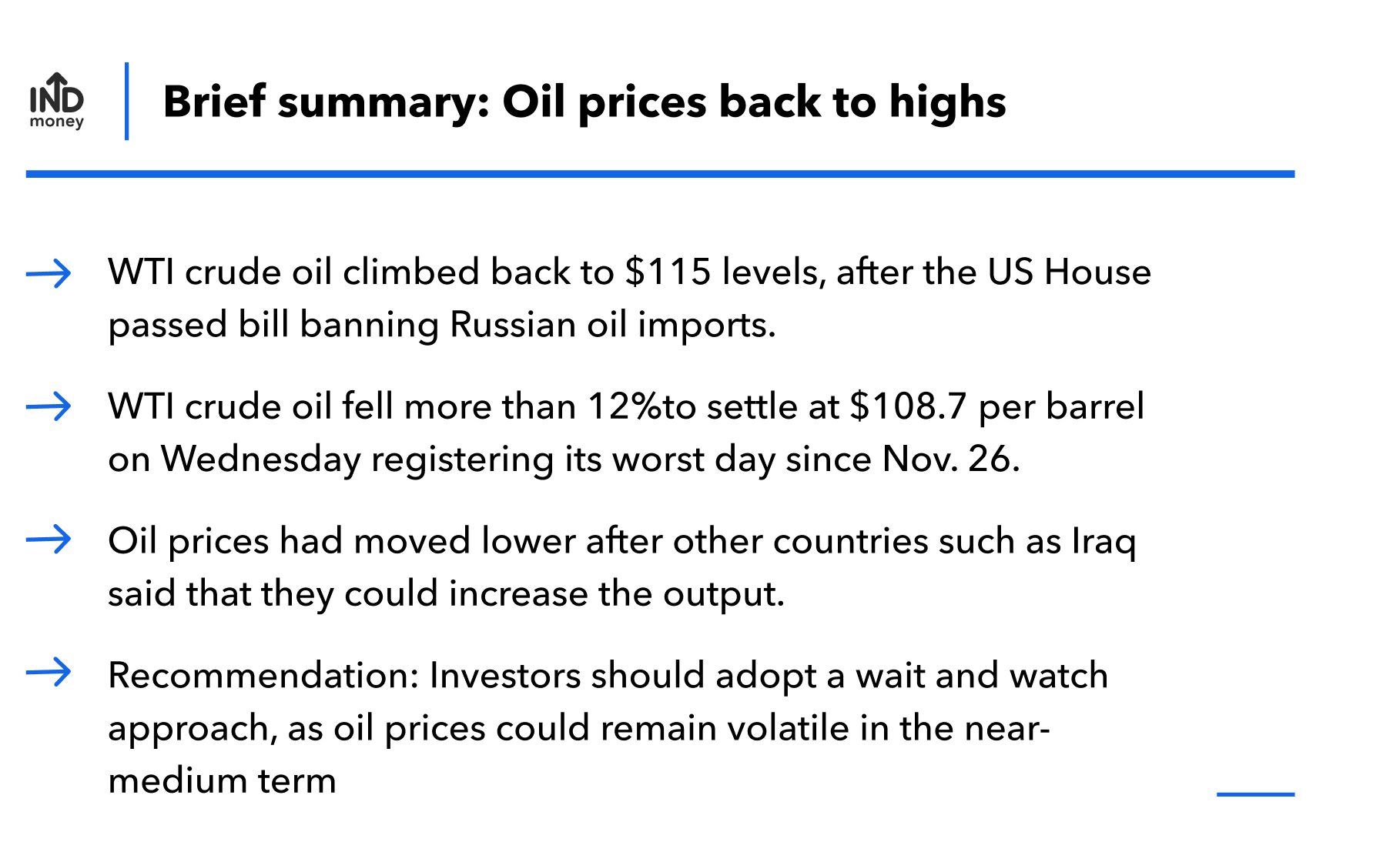 The US has announced a complete ban on Russian oil, gas, and coal imports. The UK is also expected to phase out Russian oil by the end of the year. The EU has mentioned that they are going to reduce Russian imports by two-thirds in the future.

Can the world survive without Russian oil?

Russia is the third-biggest oil producer in the world. In terms of barrels per day, it exports 5 million barrels per day - more than half of it goes to the European country. The US will not be much impacted as it only imports 3% of its total oil import.

It is obvious that if Russian oil stops going to Europe, the price will shoot up and that is already happening for the past few weeks. Yes, there are alternatives - Europe could turn to Qatar, Algeria, Nigeria but it is not something that can be done immediately.

The US has been asking Saudi Arabia to increase its oil production, but the Saudi government has rebuffed previous US requests to boost output in order to reduce oil prices.

Unless the major oil-producing nations increase their output, the world is not likely to survive without Russian oil.

After continuously increasing for weeks, the oil price declined by 17% on Wednesday. The UAE is pushing members of the OPEC group to raise the output. The US government has already pledged to increase production to reduce the price. The International Energy Agency (IEA) recently agreed to release 60 million barrels of oil from strategic national reserves. However, that move is not enough to respond to the recent run-up in prices. With IEA news and the push, we saw a fall in the oil price yesterday.

However, there has been no official statement that the output is going to be increased by OPEC nations. The UAE energy minister Suhail al-Mazrouei said that the Gulf state remained committed to the existing OPEC monthly output agreement, which fixes how much crude is produced by member countries (400,000 barrels per day of supply monthly). This statement is the prime reason for oil prices increasing again on Thursday.

While the UAE as well as Saudi Arabia have some spare capacity, some other OPEC+ oil majors are struggling to meet their output targets. The developing geopolitical situation implies that oil prices could remain volatile in the near-medium term. Investors should adopt a ‘wait and watch’ approach.