Profit below estimates: Nestle India has reported a 10.68% on-year rise in net profit to Rs 539 crore in Apr-Jun 21 period against Rs 487 crore in the same quarter last year. Sequentially, however, the profit declined by 10.5% compared with Rs 602.25 crore at the end of the March 21 quarter. The company missed the street's estimates as brokerages had projected a 14-19% jump in profit.

Revenue misses estimates:The Revenue from operations for the quarter ended June rose 14% on yearly basis to Rs 3,477 crore as against Rs 3,051 crore last year. On a sequential basis, the figure was down by 3.7% from Rs 3,611 crore in the preceding quarter. Total Sales and Domestic Sales for the quarter increased by 13.8% and 13.7% respectively, on a lower base impacted by Covid- 19 induced lockdown with production disruptions across factories. Domestic Sales growth was driven by volume & mix. Export Sales increased by 17.7% due to timing of exports to affiliates 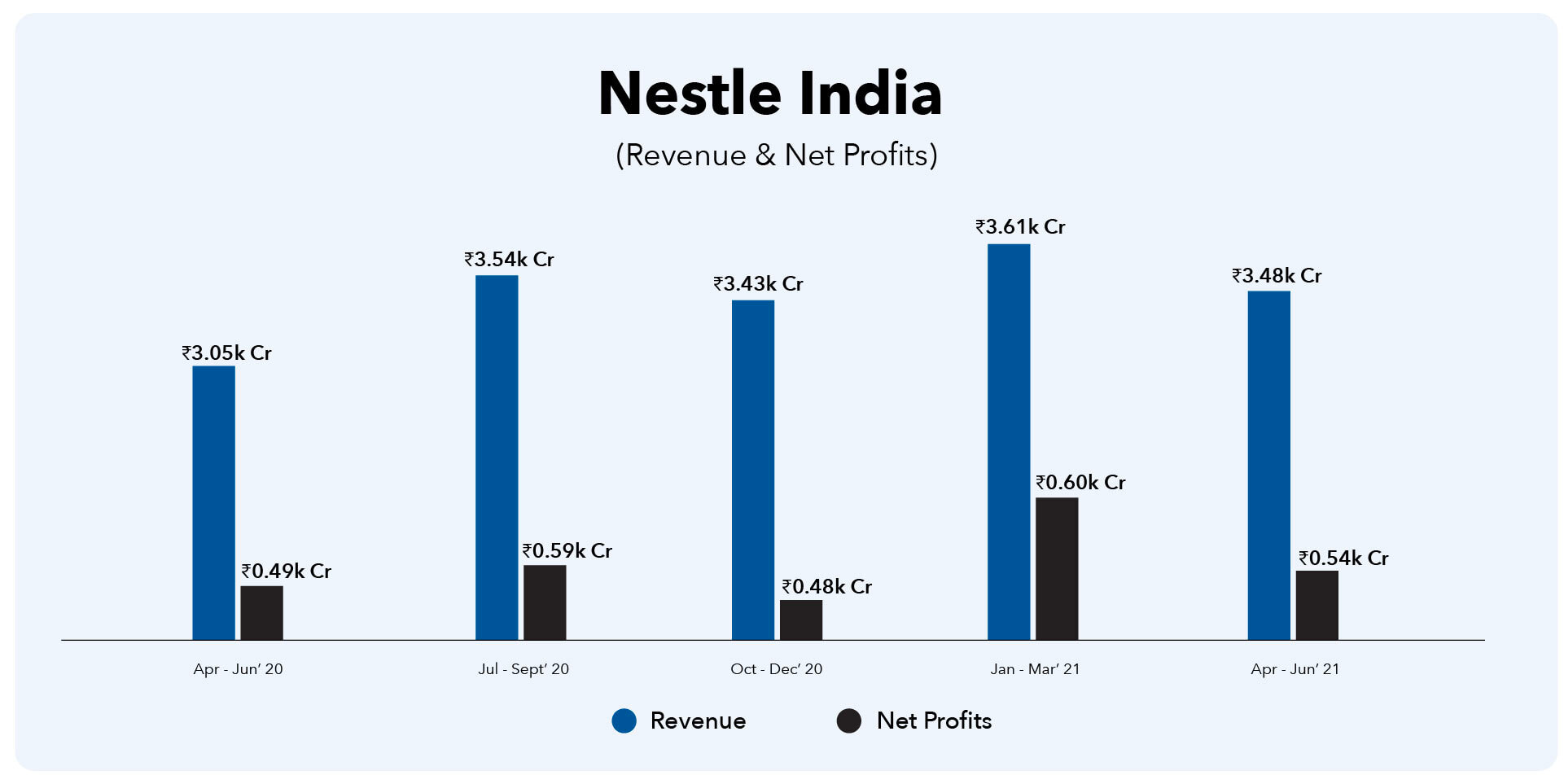 Expenditure rises: Total expenses rose 13.94% on-year to Rs 2,775.68 crore, including a 23.80% increase in the cost of materials consumed. Cost of materials consumed as a percentage to sales was marginally favourable due to realisations and mix offset by higher commodity prices. Other expenditure, however, increased largely due to rising fuel prices and compares to a base quarter impacted by restricted operations due to Covid lockdown

Double digit growth in key brands: Nestle India’s key products MAGGI Noodles, KITKAT, Nestlé MUNCH, MAGGI Sauces, MAGGI MASALA-AE-MAGIC posted strong double-digit growth. This was backed by strong performance in E-Commerce channels which grew by 105% and contributed 6.4% of domestic sales and last mile access aided by e-commerce and in particular hyperlocal (quick commerce) channels, which grew by 147% in the first half of this year

Reserve transfer: The board of the company decided to transfer its entire general reserve of Rs 837 crore to retained earnings from January 2022. The reserves transferred will be available to the company for use such as distribution among members of the company and shareholders. The company said that given its strong financial position and track record of cash generation, the funds represented by such accumulated general reserves were seen to be in excess of the company's current and anticipated needs.

Nestle India has delivered a lacklustre set of numbers for Apr-Jun quarter as the second Covid wave hurt demand. Sharp increases in raw material and fuel prices also remain key concerns. Net Cash generation in the Quarter was strong, partially offset by a planned increase in working capital and a higher capital expenditure.The Board also approved disinvestment of Nestle's entire minority stake of 19.98% in Sahyadri Agro and Dairy, a company engaged in milk collection business in western India, due to change in the business scenario.Going forward improvement in e-commerce sales, focus on innovation and distribution augurs well for future growth prospects and company’s relatively high pricing power that will aid margins. Further, Nestle India plans to invest Rs 2,600 crore over three-four years to help address the fast growing domestic market.

Brokerages see the double-digit growth in Nestle India’s key brands such as Maggi and KitKat as an encouraging sign, and its focus on rural markets to benefit in the upcoming quarters. That comes even as the consumer goods maker saw its revenue and profit fall sequentially, missing estimates, in the quarter ended June. Of the 41 analysts tracking the company, 18 firms including CLSA maintain a ‘buy’, 17 including Jefferies have a ‘hold’ and six recommend a ‘sell’. The consensus target price ranged between Rs 17000-20000.Shares of Nestle India ended 1.2 per cent lower at Rs 18,000 on the National Stock Exchange.