After falling by over 5% on Wednesday, Marico shares extended decline on Thursday. The stock has been under pressure after the company provided a poor business update in Q4. The stock has declined by over 7% since the company shared its Jan-Mar 22 business highlights. 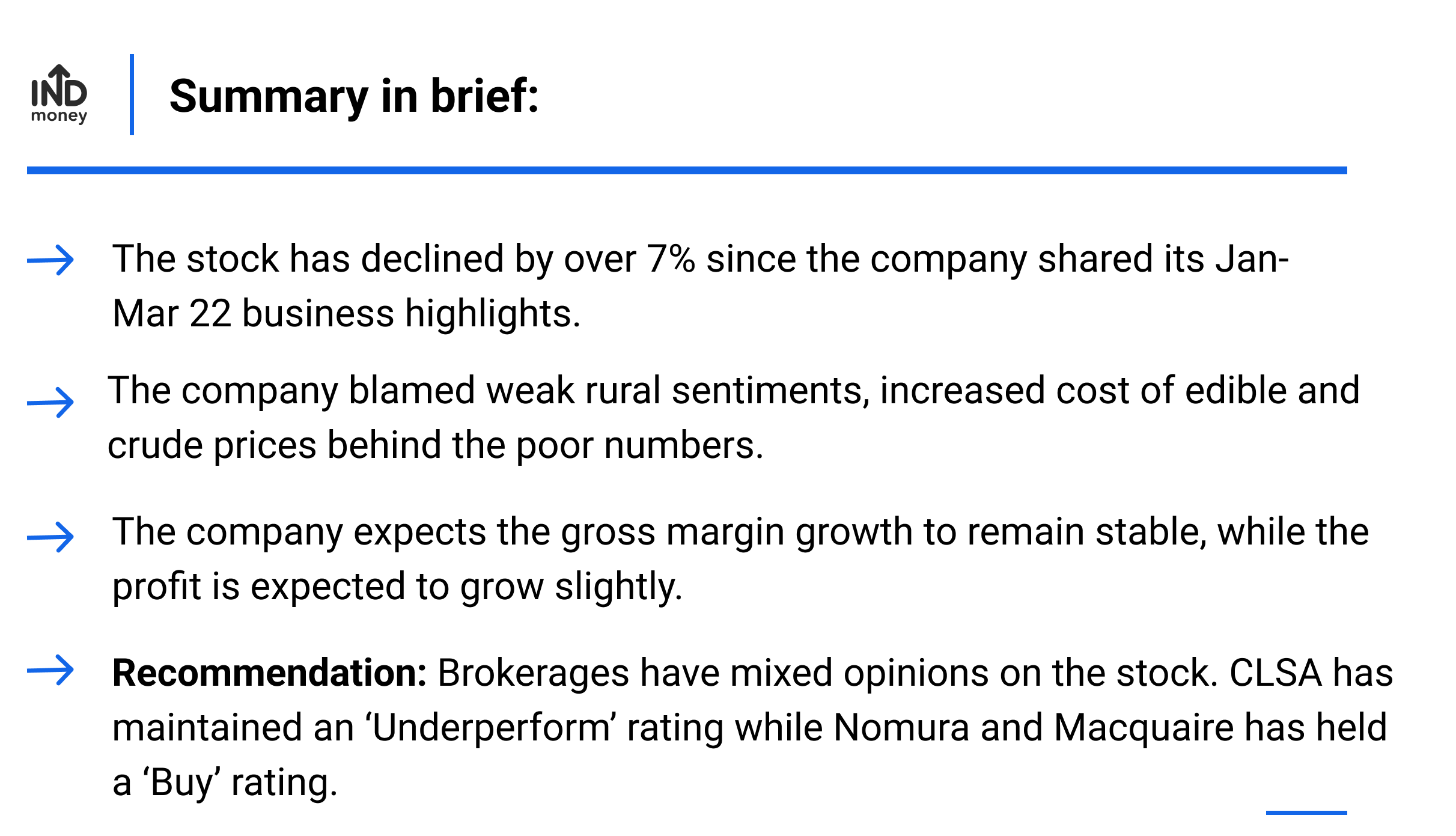 The stock opened 2% lower at Rs 521.30, i.e., losing over Rs 8 from its previous day's closing of Rs 512. It then hit an intraday low of Rs 511.20 after the company announced the summary of the demand trends and operating performance for the first quarter of the year.

Q4 Updates
"During the quarter, consumption trends remained subdued amidst weak rural sentiment and inflation in global commodities aggravating due to geopolitical tensions" It further added "While companies affected price hikes across FMCG categories to cope with the cost-push, persistent inflation continued to hurt consumer wallets across rural and urban. As a result, FMCG volumes declined in the Jan-Feb’22 period on a year-on-year basis (per Nielsen)" the company said.

Marico is known for producing some of the common household products like Saffola and Parachute oil. The company said that its India’s business remained firm despite challenging macro factors. It further added that the Parachute oil sale volumes were marginally lower Y-o-Y because of the high base.

Among other important inputs, the prices of copra remained mild on the softer side, but there was a continuous spike in edible and crude prices owing to the ongoing geopolitical tensions. To counter the same, the company made calculated price hikes in value-added hair oils and Saffola edible oil products.

The company expects the gross margin to be more or less the same as that of the same quarter of the previous year, while the profit is expected to grow only slightly. The Indian FMCG market is witnessing subdued demand from the population due to higher inflationary pressure.

The revenue growth remained low in the quarter with single digits, and with marginally positive volumes over an exceptionally higher base. This led to a double-digit CAGR in volume over the past 2 years.

On the international front, Marico said that its overseas business performed well. It registered double-digit constant currency growth on a strong base with almost all markets performing fairly well.

Marico shares closed at Rs 513 on Thursday after losing an overall of 2%. CLSA has maintained an ‘Underperform’ rating on the stock along with a price target of Rs 530. The global research and broking firm expects the company’s gross and operating margin to get stable on Y-o-Y basis.

On the other hand, Macquaire, another global financial services firm has given an ‘Outperform’ rating on Marico stock with a target price of Rs 600.

Similarly, Nomura, a Japanese financial holding company, has maintained a ‘Buy’ rating for the stock with an even higher price target of Rs 665. It expects Marico’s consolidated revenue to grow at 7.5% by the last quarter of 2022, while EBITDA and profit growth to be at 9% and 5% Y-o-Y respectively.