Macrotech Developers (formerly known as Lodha Developers) is set to raise up to Rs 2,500 crore via IPO which opens on 7th April, Wednesday. Here are the details: 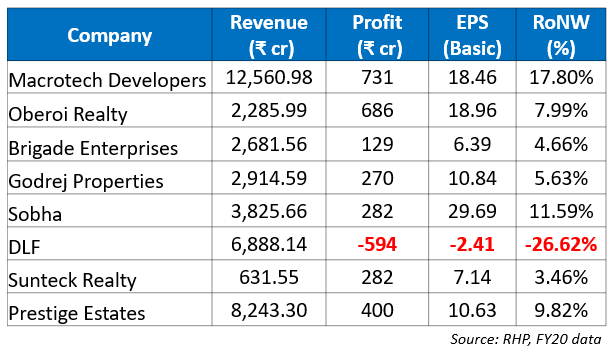 Some key highlights of Macrotech

Issue Size: The IPO consists of a fresh issue of Rs 2,500 crore. The fresh issue includes a reservation of equity shares of Rs 30 crore for Lodha’s employees.

Macrotech Developers has reported losses over the last nine months, and hence, it has a negative P/E ratio in terms of 9MFY21 data. That said, the company is valued at a PE ratio of ~29.16 times based on FY20 data. The issue seems to be expensively priced, as compared to peers.

The company’s financial performance has taken a hit over the last two years. Further, real-estate business have been severely impacted following Covid-19 related disruptions. This has also hurt investor sentiment in the space. Even though the company ranks better as compared to peers in terms of margins and return ratios, Macrotech is burdened by very high debt. Given its huge issue size, Macrotech IPO is unlikely to see huge listing gains. Given factors such as weak outlook (due to Covid-19 disruptions), lacklustre financial performance, high debt and expensive valuations, we remain Neutral on the prospects of the issue.