Laxmi Organic is set to raise up to Rs 600 crore via IPO which opened on 15th March, Monday. Here are the details: 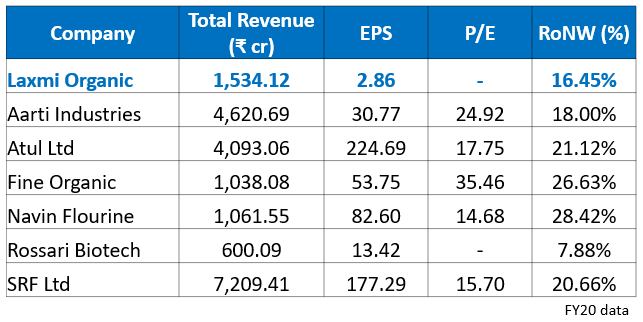 Issue Size: The Rs 600-crore IPO comprises a fresh issue and an offer for sale of equity shares, each aggregating up to Rs 300 crore.

At the higher end of the price band, Laxmi Organic IPO is priced at ~49.8 times FY20 Earnings Per Share (on a trailing basis), and around ~37.6 times annualised EPS of 1HFY21. This is reasonable, considering that listed peers such as Aarti Industries (PE of ~45), Fine Organic (PE of 62), and Rossari Biotech (PE of  71), are trading at higher valuations. As is the case in the IPO season, good businesses are getting priced at expensive valuations. However, the issue is cheaper compared to the ongoing IPO of Anupam Rasayan.

The company has a good market share in Acetyl Intermediaries & Specialty Intermediates business. It is also establishing its footprint in the Fluorospecialty chemicals business. Its expansion into high-margin fluorochemicals space brightens its topline and bottomline growth outlook over the long-term.

Considering factors such as good return ratios, robust growth outlook, dominant market share and reasonable valuations, we remain positive on the long-term prospects of the issue.