On Monday, the domestic equity barometers ended with deep cuts amid a global sell-off in equities, fuelled by rising tensions in Ukraine. The sentiments were negative also because of the Fed's ad-hoc meeting. Sensex tanked 1,747.08 points, or 3%, to 56,405.84, while Nifty fell 532 points to 16,842.80. The market opened with a gap down (2%) and remained around the same level most of the day. This was market’s worst day since mid April-21.

On Tuesday, the market made a sharp rebound after a report fuelled optimism that Russia is de-escalating tensions with Ukraine. Also, the Federal Reserve’s decision to not announce any interest rate hike in its ad-hoc meeting came as a relief.

On Wednesday, the market was highly volatile as investors were kept on edge due to geopolitical risks. Investors continued to evaluate escalating costs and the likelihood of tightening monetary policy in places like the U.S. and the U.K., where inflation surged.

On Thursday, the market again had a volatile day with the market going in positive a few times during the day but eventually closing in the red. The US warned that Russia's military presence on Ukraine's borders was growing, rather than shrinking as Moscow has insisted. Most sectoral indices ended lower with Nifty Bank down over 1%. Oil and gas and the FMCG index were the only gainers.

On Friday, the market closed negative for the third straight day and the second consecutive week. Even though the tension between Russia and Ukraine has eased out, the sharper Fed interest-rate liftoff in March is still a worry for the investors. The top drag was Pharma, realty, oil & gas stocks. For the week, the Nifty closed 0.6% lower. 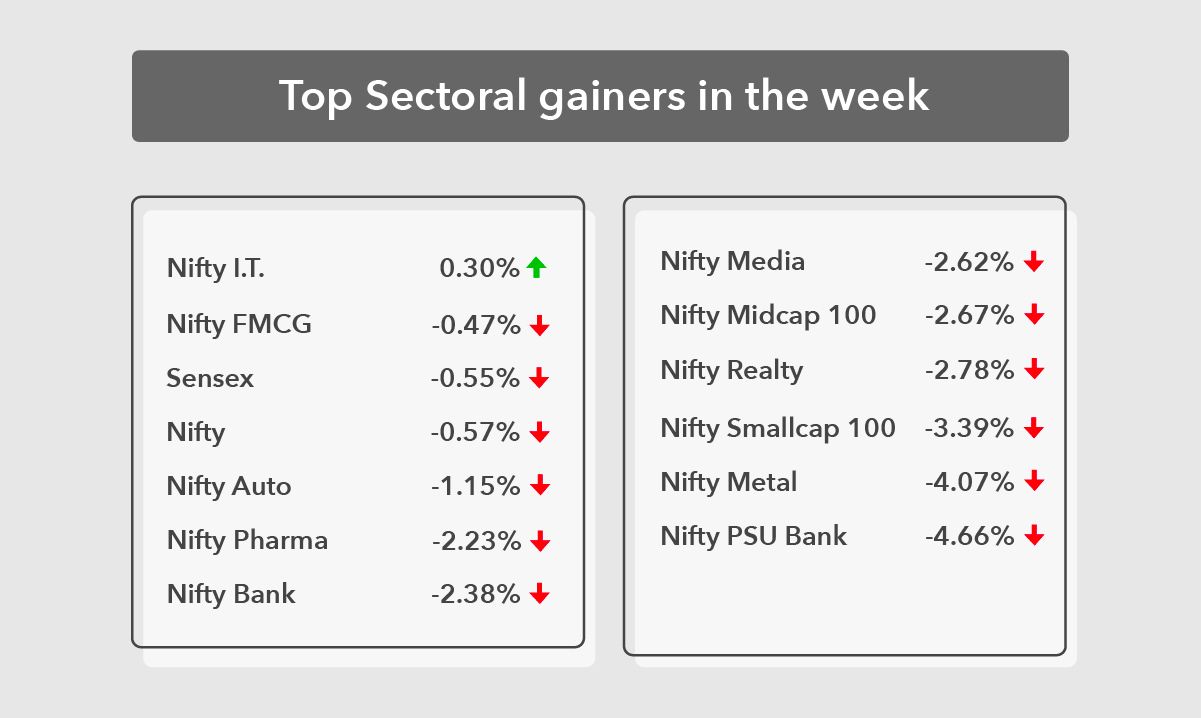 High inflation in the US: The US inflation data was out last week and the numbers were worrying. Consumer price index showed that inflation rose to 7.5%, the highest rise since 1982. The 10-year Treasury yield also jumped above 2% after starting the year at 1.51%.The Fed kept an ad-hoc meeting and it was expected an interest rate hike could happen soon but to investors' relief, no interest rate was announced. Check our detailed article on the Fed meeting detail and its outcome.

LIC filed for DRPH: LIC filed for DRPH  and the IPO is expected to come next month. It will be India's largest IPO to date as LIC plans to offload 316.25 million shares and it will constitute a 4.99% stake sale by the company. Check our detailed article on the same.

Vedant Fashions gets listed: Shares of Vedant Fashions Ltd listed at an 8% premium on the exchanges despite a muted response to its IPO earlier. The stock listed at Rs 935 apiece, a 7.9% premium to its IPO price of Rs 866. However, the shares have given up some of their listing gains to close the week at Rs 905.80. If you are invested in the share, please check our article to find what to do next.

That’s all for this week’s market wrap. We will be back with more interesting market insights in the next week.