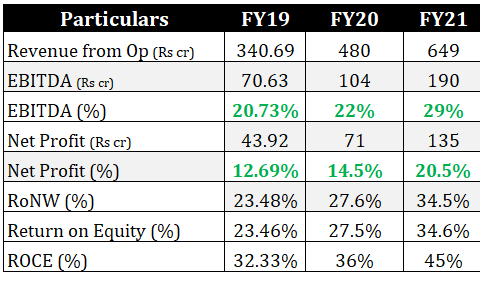 India Pesticides has reported a strong growth in topline and bottomline over the last three years, even as the agrochemicals industry witnessed good tailwinds. The tailwinds include India’s prominent rank (4th globally) in agro-chemicals production, and huge rise in demand due to growing population. The ‘China plus one’ strategy, which seeks to reduce dependency on China, is also boosting demand for the company’s products.

As a result, India Pesticides has grown to become one of the fastest growing agro-chemicals companies in terms of volume of technicals manufactured in India.

At the higher end of the price band, India Pesticides IPO is attractively priced at 25 times FY21 earnings. Peers including Rallis India (33 times), PI Industries (79 times), Sumitomo (79 times) are trading at much higher valuations. The company also ranks better than these peers in terms of return ratios.

Given factors such as healthy topline and bottomline growth, robust outlook due to industry tailwinds, strong margins, good return ratios and attractive valuations, we remain positive on the prospects of the issue.