Profit beats estimates: The Net profit grew 18% on-year to ₹7,513 crore in Q2FY21, beating street expectations. Analysts had earlier anticipated a profit of about ₹6,400 crore. The bank was able to post a higher profit on the back of stable asset quality and a healthy rise in Net Interest Income.

Net interest income rises: A bank’s primary business is to borrow money and lend the same at a rate higher than the rate at which they borrowed. The income generated from this differential is known as net interest income. Modern-day banks have a lot of sources of revenue. However, this is an extremely important number to truly find out as to how much a bank is earning from its core operations. Net interest income for HDFC Bank grew 17% YoY to ₹15,776 crore. Net interest margin was at a steady at 4.1% for the quarter. Other income was up 9% year-on-year to ₹6,092.5 crore. The table below shows HDFC Bank's revenue from various segments. 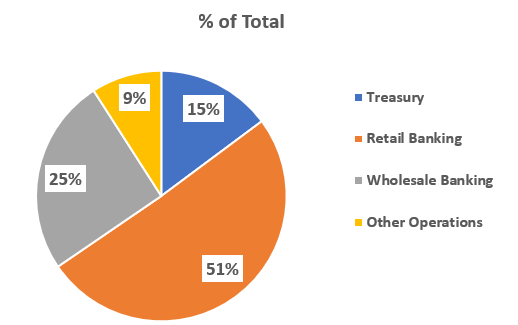 Asset quality improves: The bank’s asset quality improved with the gross non-performing asset ratio reducing to 1.08% of total advances as against 1.36% in Q1. Net NPA ratio for the bank fell 16 basis points to 0.17%. HDFC Bank set aside total provisions worth Rs 3,704 crore, higher than the Rs 2,700 crore reported last year.

Update on moratorium: The RBI had permitted banks to offer a moratorium to borrowers until the end of August to help them mitigate the impact of the pandemic. Following this, the Reserve Bank of India in September permitted one-time restructuring of advances of companies and retail borrowers hit by the Covid-19 pandemic. While these assets don’t have to be marked as NPAs, banks have been asked to disclose details of the restructured assets.

Deposits: HDFC Bank’s deposits grew 20.3% to ₹12.29 lakh crore. Bank’s CASA (current and savings account) deposit now comprise 41.6% of total deposits of the bank. CASA capital is the cheapest source of capital for banks. The higher the number the more profit a bank can earn. Advances were up 15.8% on-year to Rs 10.38 lakh crore.

New CEO: The September quarter will be the last under the leadership of Aditya Puri, who will step down by October-end. The bank has appointed Sashidhar Jagdishan as an additional director and also managing director and chief executive officer of the bank, effective 27th October. Jagdishan's appointment will be for a period of three years.

Despite the effects of the pandemic, HDFC Bank has delivered strong results in the Jul-Sep period. HDFC Bank said that the ongoing pandemic has led to decrease in loan originations, the sale of third-party products, the use of credit and debit cards by customers and the efficiency in collection efforts.

Domestic retail loans grew 5.3% while wholesale loans were up 26.5% for the quarter. The asset quality of the bank has also shown improvement. The bank’s capital adequacy ratio (19.1%) remind well above the regulatory requirements (11.075%). Even though the current economic environment is extremely stressful for the Banking Industry, we believe HDFC Bank has the necessary firepower to tide over these turbulent times.