Profit and Revenue decline - Coal India reported a net profit of Rs 3,169.8 crore for the quarter ended June, a sequential decline of 31% against Rs 4,587 crore in the last quarter. The profit was well below the analyst estimates of Rs 3,973 crore. On a yearly basis, however, net profit jumped 52.5% from Rs 2,079 crore last year. The revenue has declined sequentially by 5.3% and stood at Rs 25,282 crore. The revenue fell slightly short of analyst estimates of Rs 25,658.8 crore. In the same period last year, the company had reported a revenue of Rs 18,486 crore. 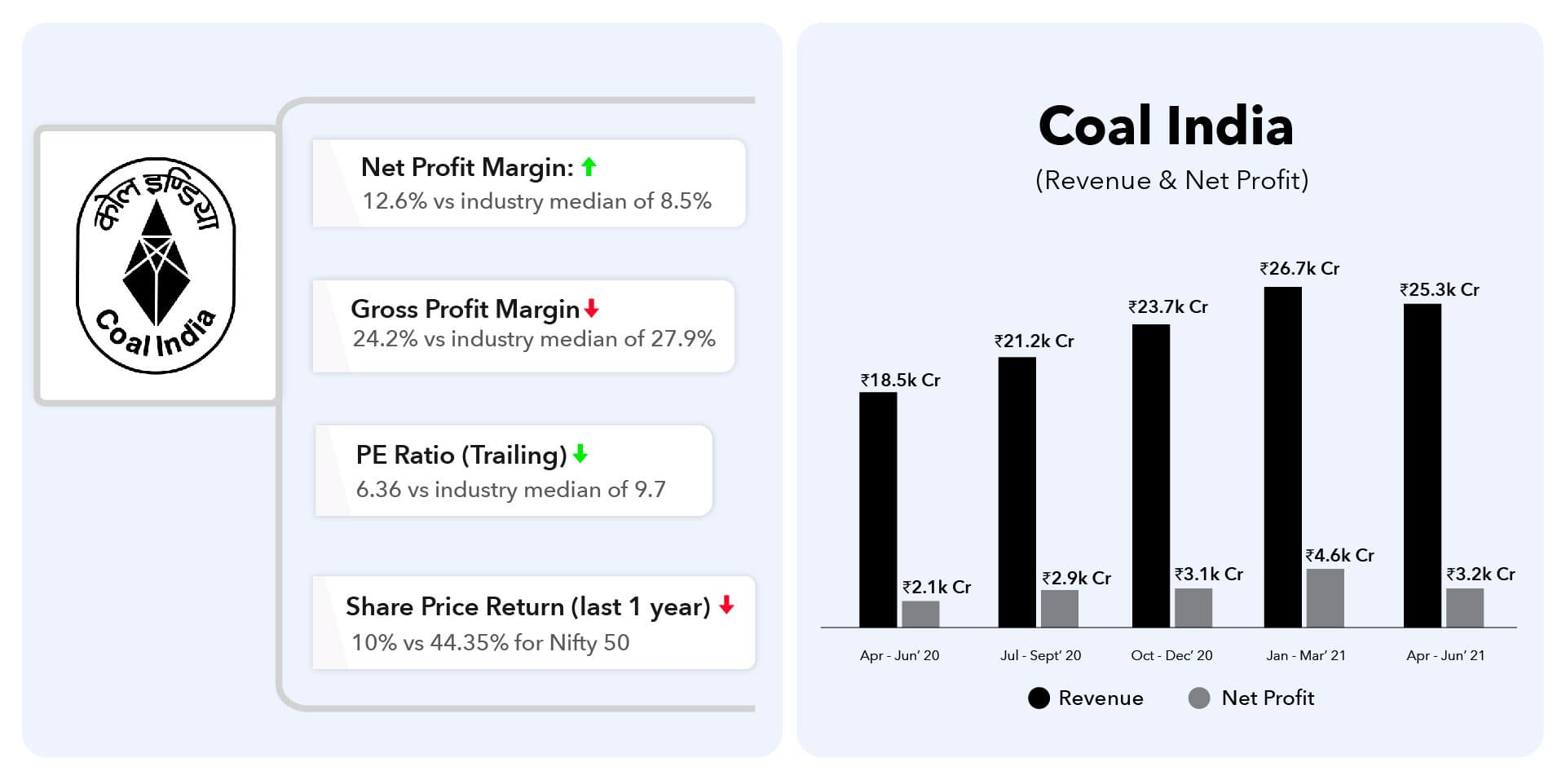 Production and sales - Coal India’s production during the quarter stood at 123.98 million tonnes as compared to 121 mt in the year-ago quarter. The sales income stood at Rs 23,294 crore in the April-June quarter, a significant increase of 37% from Rs 17,007 crore in the same period last year. The company reported a raw sales volume of 160.4 million tonnes against 164.8 million tonnes in the previous quarter.

Coal India has reported a lacklustre set of numbers for the quarter ended June.The strong year-on-year performance is on the back of a low base in the year-ago quarter. On a sequential basis, the company’s topline and bottomline was affected by the second wave of Covid-19 infections in the country. The company also saw a sharp rise in expenses during the quarter led by raw material cost. Coal India’s consolidated total expenses in the reported quarter jumped 31.3% on-year to Rs 21,626.5 crore. The key downside risks for Coal India are: weakness in the power sector leading to lower volumes, weakness in international coal prices (impacting the sentiment and making imported coal more competitive vs domestic coal), and the natural disasters impacting volumes. Higher diesel expenses, higher depreciation and lower other income were the other major reasons offsetting higher volumes. As of June 30, 2021, the Government of India held 66.13% stake in the company.

The decline in realisation, according to Antique Stock Broking, could be because of a different mix of coal, lower impact of performance incentives; and lesser penalties. ICICI Securities has maintained a ‘Buy’ rating with the target price of Rs 142. Brokerages offtake volume estimates for FY22E/FY23E are at 625mt/655mt (million tonnes) respectively. Their conservative volume estimates take into consideration the impact of flood-like situations in eastern India. They expect dividend payout to be high, leading to 14% dividend yield at current prices, as incremental capex in diversified segments is expected to be funded primarily by debt. The company's scrip on NSE was trading 0.1% lower at Rs 143.10.