Bharti Airtel shares have been in focus in the last few days, due to favourable developments around FDI approvals for its downstream businesses, and robust earnings outlook. Here are some key highlights:

Bharti Airtel is expected to continue to show strong revenue growth in Q3FY21, backed by growth in high-value subscribers due to migration from 2G to 4G by users. The company’s ARPU (Average Revenue Per User)- the amount Airtel earns per subscriber per month—rose to a three-year high of ₹162 in Q2FY21. This is expected to rise by 2-3% sequentially. 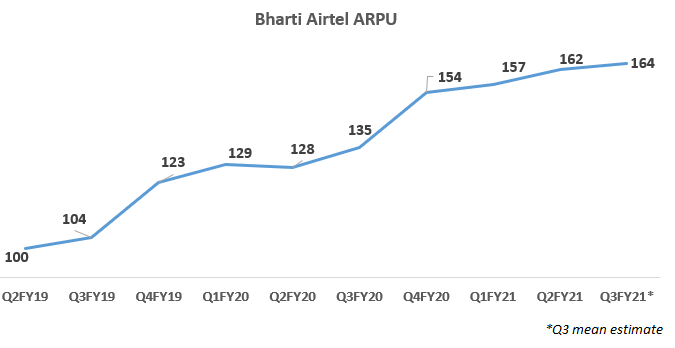 Airtel is expected to continue to gain market share in the upcoming quarter, aided by Vodafone Idea churn and challenges faced by Reliance Jio due to farmer's protest. Airtel added 3.67 million new subscribers in October, whereas Jio’s addition to its user base stood at 2.22 million. Vodafone Idea lost 2.65 million of its existing users.

After a gap of four years, Airtel had regained the leadership position in subscriber addition in September 2020, thus October being the second consecutive months where the telco has outperformed its peers.

Airtel has received approval to raise foreign direct investment (FDI) in its downstream companies such as Bharti Hexacom, Bharti Telesonic and Bharti Teleport. The Company is initiating the process to revise its foreign investment limit to 100% with immediate effect. This could result in further MSCI buying in the future.

The table below shows the mean estimate for Airtel’s earnings in the next two quarters. The telecom sector has benefited from the Covid-19 crisis given the surge in demand for telecom services as a result of digitization of workplaces and business. Bharti is expected to benefit the most from the revival in industry revenues due to a strong spectrum footprint, robust balance sheet, and strong execution.