Net profits: Bharti Airtel reported a consolidated net profit of ₹1,134 crore for the quarter ending September 30, 2021. This is an increase of 300% when compared with ₹283 crore in the June quarter of current financial year. Airtel had reported a loss of Rs 763 cr last year during the same period in the previous fiscal year. The growth in bottomline was aided by an exceptional gain of Rs 722.1 crore on account of transfer of spectrum rights during the quarter. Analysts had earlier estimated a net profit of about Rs 750 crore.

Revenue rises: Bharti Airtel reported a 13 percent y-o-y growth in consolidated revenue from Rs 25,060 crore in the previous year to Rs 28,326 crore for the reported quarter. Sequentially, the revenues have improved by 5% from Rs 26,854 in the preceding quarter. The revenue also came in higher than street estimates of about Rs 27,700 crore. 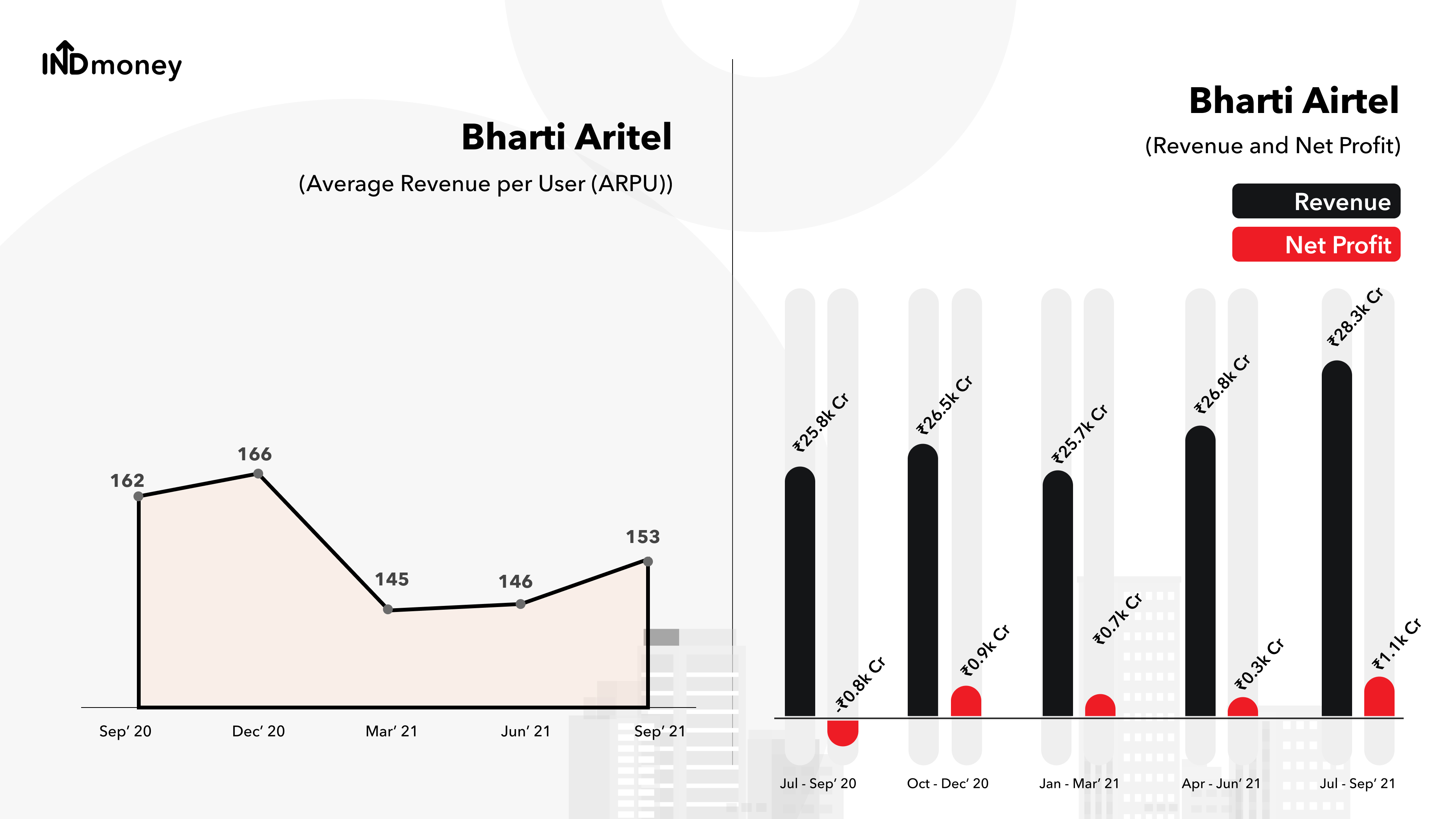 ARPU rises sharply: Average Revenue Per User (ARPU) is the amount an operator earns per subscriber every month.This increased from Rs 146 to Rs 153 sequentially. This came in after Airtel discontinued some lower end prepaid plans, among other measures to boost ARPU. AIrtel’s strategy to focus on quality customers paid off.

Africa Business - The Africa business in constant currency generated 22.7% more revenues on a yearly basis on a customer base of 12.2 crore. Capex spend in this quarter for the business was Rs 1,032 crore.

User base - 4G customers for the company improved by 26% y-o-y to 19.2 crore and the company added ~4 crore 4G users to its fold in the receding four quarters. Airtel has an overall customer base of ~48 crore across 16 countries with India having ~35.5 crore customers and  Africa stands at 12.2 crore. In the quarter gone by, Airtel added 81 lakh 4G users. The 4G users now constitute more than 60% of the overall user base.

Management commentary: “We continue to maintain a high degree of financial flexibility. As a result, we have now achieved Nil bank debt for our India businesses. We will continue to evaluate all options to maintain a comfortable leverage profile and manage associated costs. We have achieved Nil bank debt for our India business. The step up in performance of our enterprise and homes business reflects the resilience and strength of our over portfolio.

Bharti Airtel has reported a strong set of numbers for the Jul-Sep 21 period, helped by a one-time gain in transfer of spectrum rights from Reliance Jio. The company was also able to report higher topline numbers driven by tariff hikes (in July) and a focus on quality customers. The company has also seen a healthy rise in its ARPUs to Rs 153, much higher than Rs 143.6 reported by Reliance Jio.

The recent rights issue has also helped the company to strengthen its balance sheet. The Net Debt-EBITDA ratio (annualized) as on Sep 30, 2021 is at 2.96 times as compared to 3.18 times as on September 30, 2020. In September, the government had also announced a slew of measures for the telecom sector. One of the most important measures included a 4-year moratorium on spectrum and AGR dues. Airtel said that it welcomes the reforms announced by the government, as it adds to India’s digital story.

The telecom sector has benefited from the Covid-19 crisis given the surge in demand for telecom services as a result of digitization of workplaces and business. Bharti is expected to benefit the most from the revival in industry revenues due to a strong spectrum footprint, robust balance sheet, and strong execution.The company is improving its services by deploying  additional spectrum across in multiple circles during the quarter to improve network availability and data speeds. Bharti Airtel remains comfortably placed, and will continue to gain market share from struggling competitor Vodafone Idea and also tackle the competition from Reliance Jio.

Global brokerage firm Jefferies has maintained  a Buy call on the stock with a target of Rs 860. The firm noted that the revenue/EBITDA was in-line while profit beat its estimates. The mobile ARPU missed estimate, however lower than expected churn offset this. The subscriber mix has improved further, a reflection of its network investments, while homes & enterprise segments also surprised positively, said the research house.

CLSA has also retained its Buy rating on Bharti Airtel stock. It said that Bharti's second quarter beat adds upside to its revenue/Ebitda forecasts but minorities and tax downside risk to profit. “Led by Bharti's 4G penetration of 60% of its own India mobile subscribers along with ARPU growth, we forecast a 15% consolidated Ebitda CAGR by FY24,' CLSA said in a note. It has a target price of Rs 860 on the shares. Bharti Airtel shares closed 2.3% lower at Rs 697.50 on NSE.