It’s the start of the new month and the auto industry is ready with their November sales numbers. Let’s find out which company fared well in its segment. 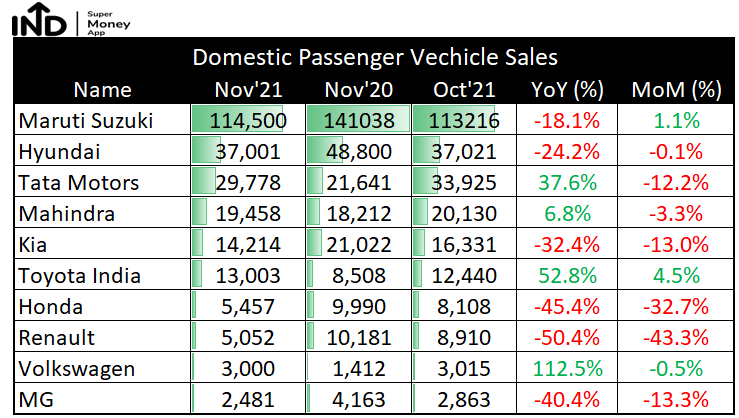 PV segment: The PV industry sales in Nov-21 came in at more than 2.8 lakh, remaining flat on MoM basis. Despite the chip shortages and supply constraints in the last few months, the demand for PV remains intact. Going forward analysts expect a gradual recovery in the segment.

Sales volume in Nov’21 was supported by strong demand momentum. The company mentioned that chip shortages had a minor impact on production levels in Nov’21. Chip shortage is expected to affect production in Dec’21 as well (company has guided for 80-85% of normalized production levels). The company sees scope for regaining lost volume during the leaner months post festivals, led by strong demand and improving supply chain dynamics.

The company witnessed decent demand trends, led by new product launches and strong response to existing models. Supply of semiconductors continues to be an issue and the company is working towards addressing it on a priority basis. The company expects improving reservoir levels and sustained sowing activities to support volumes going ahead.

CVs: Sales across most OEMs were somewhat disappointing due to relatively muted growth. However, underlying demand drivers are in place and should lead to volume uptick in the coming months. Analysts see elevated fuel prices and a relatively cautious stance of the financiers acting as headwinds in the near term. In domestic CVs, AL/Tata Motors/VECV witnessed MoM moderation in volumes and came slightly below broader expectations.

Overall MHCV volume posted growth on a YoY basis on the back of demand from infrastructure & construction sectors. Analysts see the demand momentum sustaining post normalization of economic activities and due to a relatively moderate stance of financiers.

2Ws: The 2W industry sales in Nov-21 came in at around 13 lakh down by 27% MoM. The weak demand in Rural and Urban India, subdued festive sales and higher fuel prices dented the performance. The recovery is expected only in FY23. Bajaj Auto and TVS reported volumes that were below broader expectations due to muted demand in the domestic market. Overall volumes were however supported by sustained export momentum. Royal Enfield volume came in at 52k units; in-line with broader expectations.

Strong export momentum continued to support overall volume while demand in the domestic market was relatively muted. Lifting of overall restrictions and the upcoming new launches are expected to improve retails, in our view.

Tractors: The Tractor industry sales in Nov-21 came in at 34.8k, down by 43% MoM. The volume decline was on account of the cyclical nature of business and higher base. M&M and Escorts reported weaker-than-expected numbers due to a high base, delayed Kharif harvest and uneven rural cash-flows. Analysts expect single digit volume growth for the segment in FY22.

Escorts reported muted sales volume for the month of November 2021, broadly on expected lines in the seasonally weak month. Total tractor sales volume stood at 7,116 units down 30% YoY. On the construction equipment space, the decline stood at 32.5% MoM to 312 units.

Domestic 3W sales of Bajaj Auto, M&M, TVS and Atul Auto were slightly below broader expectations due to relatively subdued demand in the domestic market.