After starting the week on a tepid note, the market saw a two-day rally on Wednesday supported by a rally in index heavyweights. However, the markets resumed their decline on Friday to end the week lower as investors weighed Fed’s hawkish comments on rate hikes.

On Monday, the market closed lower for the fourth consecutive session weighted by Information Technology (IT) and financial stocks. The index heavyweights were under pressure - Infosys fell more than 7% as it failed to meet Street estimates. HDFC Twins continued to slide.

The market, on Tuesday, opened on a positive note but remained volatile. However, heavy selling was seen in the last one hour, and the market from the positive side closed 1.2% lower. Investors remained unhappy with lower than expected quarterly results and with inflation soaring.

After five consecutive negative closures, the market closed in the green on Wednesday. The rally was led by Reliance, HDFC Twins, Infosys, and TCS. The Brent crude oil has stabilized in the $100 to $100 per barrel range, and it was a positive sign for investors.

The market continued the rally from the previous day and closed 1.4% higher on Thursday. Even though the Covid cases in North India continued to make news, the impact was not visible on the market. Reliance once again drove the show as it made its 52-week high.

On Friday, the market opened on a negative side amid weak global sentiments. A slight recovery was seen at noon, but the market slipped again in the last hours to close the week on a low. News around Fed increasing the rate by 50bps in its next monthly meeting kept investors worried. 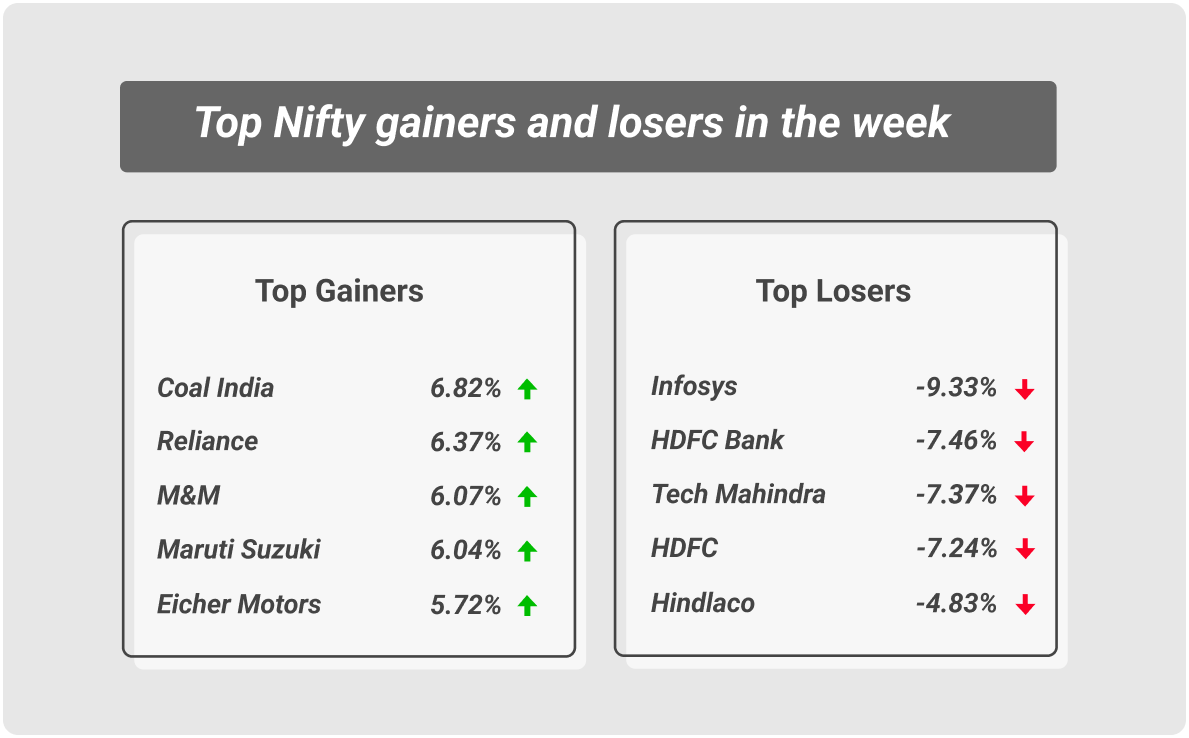 Key highlights of the week

Weekly Results - Many companies declared their results this week. Mindtree profits jumped 49% YoY. Check our detailed report here. ACC disappointed investors with its quarterly results. Check what went wrong with the company. Nestle was able to meet street estimates on revenue, but profit declined, while HCL was a clear winner as its profits soared 226%. Check the report here.

Interest rate hike by banks - The banks have started increasing the interest rate. State Bank of India (SBI) was the first to hike interest rates by 0.1%. Axis Bank and Kotak Mahindra Bank were quick to follow, and they both increased their benchmark lending rates by 0.05%.

Update on Air traffic for March - As per March reports, Indigo continued to maintain its leadership position. It had a market share of 54.8% during March, up from 51.3% in February. Air India’s market share slipped to 8.8% as against 11.1% in February. Overall, domestic air passenger traffic in the January-March period surged to 24.8 million, marking a 6.1% growth compared to the corresponding period last year.