The Nifty started off the week with decent gains on Monday, buoyed by strong global cues. Global investors cheered a stronger-than-expected jobs report and robust macro data in the US, which overpowered concerns around spread of Delta variant. The index continued its rise on Tuesday, clocking a fresh record high of 16,359.25 intra-day.

However, the index turned volatile, and settled with minor gains, as worries around the impact of Covid-19 weighed. The BSE’s latest circular dealing with additional surveillance measures and circuit filters also dampened the sentiments. The index ended largely flat on Wednesday. The BSE clarified that the latest rules will only be applicable for securities with mcap less than Rs 1,000 crore, putting an end to speculation that certain midcaps will be impacted.

The Sensex settled at record high closing by crossing 54,800-mark and Nifty closed at 16,364 levels with Power Grid, Titan and L&T boosting the indices. Upbeat global markets and supportive domestic cues lent aided gains in the headline indices. On the final day of the week, the market ended with solid gains with the Nifty closing  above 16500 level. Investors' sentiment improved after India’s retail inflation fell below the RBI’s threshold of 6% in July-21. For the week, Nifty ended 1.8% higher. 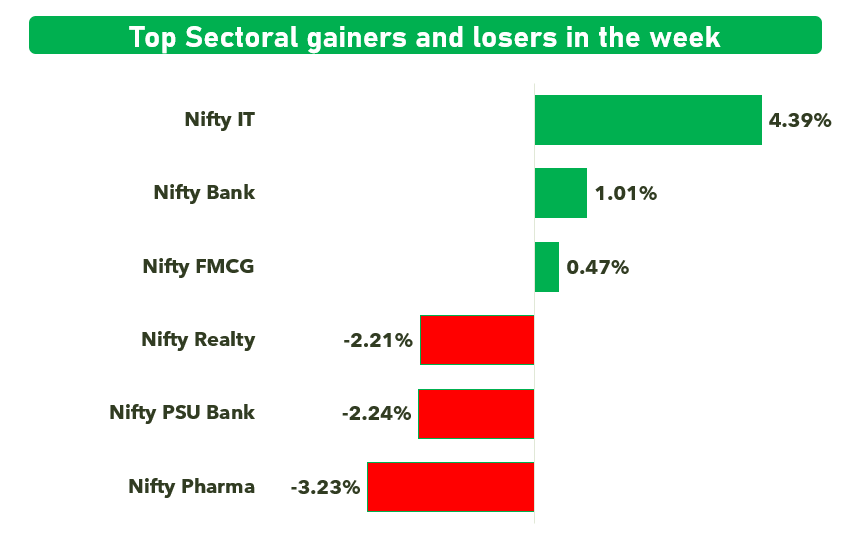 Divi’s Lab Q1 Results: Divi’s Lab has reported a strong set of numbers in Q1FY22, on the back of cost optimisations and good product mix. Sales increased due to high demand caused by Covid 19 and the margins improved due to strategic backward integrations and SEZ units. Future outlook remains positive too, as the company is undertaking large capex projects with the aim to generate 2x asset returns.Read more.

Shree Cement Q1 Results: Shree Cement has reported steady Q1 results for the quarter ended June. The company’s shares, however, fell as it lagged its peers though it met analyst estimates. The company saw its profit, revenue and operating income fall sequentially, due to rise in power and fuel costs.The company's total volume on a standalone basis stood at 6.84 million tonnes, down by 16.7% from the last quarter. Read more.